REVIEW: The War of the Worlds at Newcastle Northern Stage

A Great Start To The Year For Northern Stage 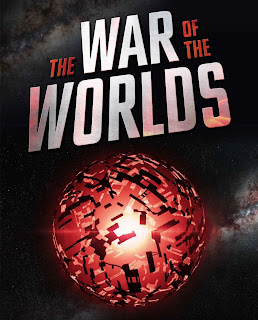 It is 1898. Newcastle. And the Martians have landed and they are not as friendly as ET was. A cast of four beautifully illustrate the trail of destruction as HG Wells’ novel is brought to the stage. This is stripped down sci-fi at its best. 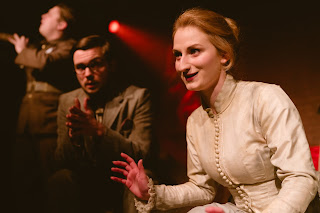 1898 was the year HG Wells tale of the arrival of visitors from neighbouring Mars first appeared in hardback. Victorian England was undergoing a seismic change in technology as the steam train improved communications on a scale that wouldn’t be repeated until Tim Berners Lee put the letters “www” into common language. They assumed they were at the cutting edge and with that came the arrogance that would see bridges collapse and boats sink to the bottom of the oceans. 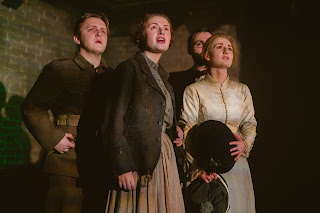 Of course such arrogance has stayed with each generation and hence space travel has resulted in the deaths of a number of astronauts and other reliance on car safety technology leads to many deaths on the highway. It is this cost of progress that HG Wells discussed in a book that was way ahead of its time. Laura Lindow’s adaptation paints a bleak picture as man tries to cope with the new visitors. This is much better than the fairly recent Tom Cruise movie. 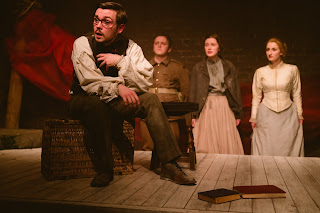 This production does not rely on gimmicks and fancy stunts, rather it uses the stage craft of 4 talented young actors to carefully describe and create the situation. Though initially appearing as ghosts that are here to warn us of actions, they quickly move back in time. Jack Lloyd is Phillip Ridley – a man who is into inventions and hence he finds himself at a friend’s house in Alnmouth, looking through the telescope at the sky as the invaders land. 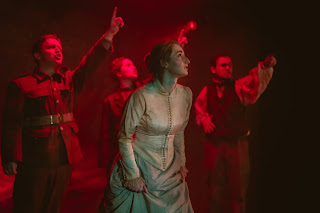 Luke Maddison appears as Barker, the owner of the telescope who leads the welcome party on the beach when the cylindrical craft lands. Charlotte Ryder is Ridley’s wife Jill, a lady who met him at science lectures but is now relegated  to a subservient housewife. The team is completed by Lauren Waine as Mo, and like Luke Maddison, filling in with other characters as the story dictates. 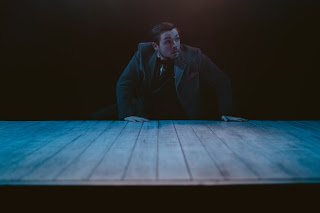 The team, in Victorian costume, held the sell-out Stage 3 crowd in their grip as the tale moved south to Newcastle, Corbridge and eventually Gateshead. This is 1898 after all and so movement did not have the luxury of cars and long distance travel. Light hearted moments crop up on their travels, though the tone of the tale is often more purposeful action rather than a frivolous comedy. Laura Lindow has gone back to the source material to create a script with has a personal feel to it. The cast, under the direction of Elayce Ismail, are able to confidently entertain the audience. 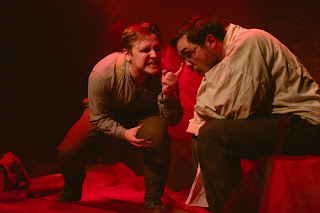 Surrounding the audience is a sound design that cleverly helps to immerse one in the action, especially as the Martians attack. Mariam Rezai has composed a soundscape that conveys the fear and failure of man’s initial attempt to thwart the oncoming invasion force. 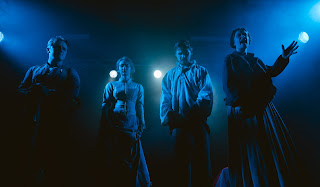 The young cast did a cracking job of storytelling and acting throughout the 70 minute show. The intimate surroundings of stage 3 adding to the atmosphere. Whilst the Northern Stage run has now sold out, it would be worthwhile trying to catch it as it tours across the region.