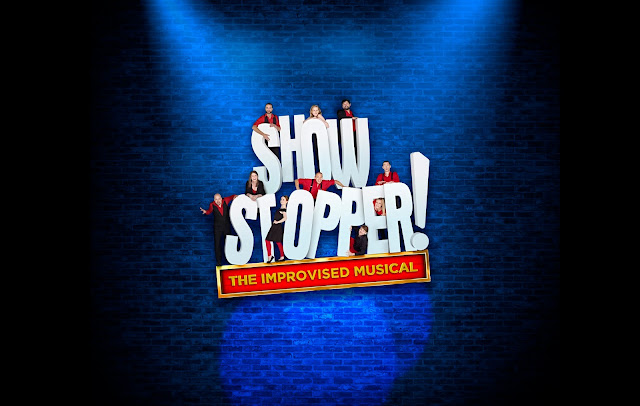 The critically acclaimed improvisational frontrunner Showstopper! The Improvised Musical heads out on tour. Fresh from their sell out run at The Edinburgh Festival Fringe 2017, and with a 2016 Olivier Award for their West End debut at the Apollo Theatre, The Showstoppers have made 2017 their best year yet, one new musical at a time.

No two nights are ever the same as The Showstoppers take audience suggestions and then spin a brand new comedy musical out of thin air - stories, characters, tunes, lyrics, dances, harmonies and all - with unpredictable and hilarious results. If you’ve thought improv looked difficult before, try doing it in time (and tune) to music!

Having grown since 2008 to become the UK’s most acclaimed and in-demand musical improvisers, The Showstoppers have become a must-see staple of the Edinburgh Festival Fringe. With four West End seasons and an acclaimed BBC Radio 4 series to their name, they have also taken their ingenious blend of comedy, musical theatre and spontaneity around the globe, picking up accolades and awards including The Times Best of the Fringe, Mervyn Stutter’s Spirit Of The Fringe Award and nominations for Chortle Best Music Or Variety Act, MTM Best Production Award and MTM Judges’ Discretionary Award.

The Cast:
The rotating cast features some of the brightest minds in the world of comedy and musical theatre. The company includes:
·  Co-founder Adam Meggido, an award-winning writer/composer who has improvised at the National, The Royal Court Theatre, Shakespeare’s Globe Theatre and currently holds the world record for the directing the longest impro show - 55 hours without a break.
·  Dylan Emery, the other co-founder, has been improvising for more than 15 years – including at the National/Royal Court/Shakespeare’s Globe. He created veteran comedy impro group Grand Theft Impro, and the UK’s premier website devoted to the form thecrunchyfrogcollective.com.
·  Pippa Evans is an Edinburgh Comedy Award Best Newcomer nominee and has had great success on TV, Radio and stage – she is a regular on BBC Radio 4’s The Now Show, BBC2’s Fast and Loose, performs regularly with the Comedy Store Players and has had many years of success with her hit character act Loretta Maine.
·  Ruth Bratt is an improv Fringe regular for the last 11 years whose recent TV credits include Ricky Gervais’ Derek, Sarah Millican’s Support Group and Vic Reeves’ The Ministry Of Curious Stuff.
·  Sarah-Louise Young won the Best Musical Variety Act in the London Cabaret Awards and was nominated for the Edinburgh Comedy Awards Best Newcomer. She has performed her critically-acclaimed Cabaret Whore show across the world.

What the press have said about The Showstoppers:

“Not only is each performance achingly funny, it’s a genuinely new musical every time.  Worth seeing again and again.”
★★★★★ Time Out London Critics’ Choice

“They truly are the masters of longform improvisation. These guys have to be seen to be believed! The best musical improvisation group we’ve ever come across. More talent on stage than you can shake a stick at!” ★★★★★Time Out Critics’ Choice

”An ingenious and engaging mix of improvisation and musical theatre. If you admired the Comedy Store Players for their ability to think on their feet, this bunch do it with the same verve and flair, but set to music. I was left open-mouthed. I can honestly say that I’d opt for this show’s wild, inventive energy of The Sound of Music any day.”  Lyn Gardner, The Guardian