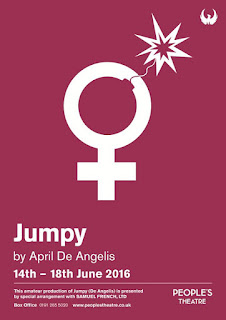 Showing the diversity of the shows that they’re willing to produce, Newcastle’s Peoples Theatre delivers the North East premiere of April de Angelis’s kitchen sink drama. Like an Abigail’s Party for 2016, it looks at society from a viewpoint of the nuclear family. Regular laughs and captivating acting combine to create a great night out.
Hillary (Rye Mattick) is turning 50 and the regular commute is stressing her out. Still, she is able to pour a glass of wine and discuss work with her husband Mark (Mark Burden). Her 15 year daughter Tilly (Amy Herdman) should be studying hard for her GCSEs but she’d rather go out to the pub with her pregnant best friend Lyndsey (Rhiannon Wilson).
Matters become more complicated when Tilly brings boyfriend Josh (Joe Robson) home. Hilary decides a meeting with Josh’s parent will help set ground rules.  The trouble is the fact his parents, actor Roland (Colin Jeffrey) & Bea (Sharon Lamont), have their own issues to deal with.
Hilary has come a long way since she held hands around Greenham Common in protest against the American missiles. The possibility of redundancy and her daughter’s shenanigans linger in her mind.  She is able to chill out once a month as her friend, Frances (Melanie Dagg) arrives on the second Friday of the month with a lovely bottle of wine. Perhaps a weekend in Norfolk is the answer to the families needs?
Kevin Gibson directs a tight contemporary story that had a number of very funny moments. The central characters make a believable family unit. Rye Mattick and Amy Herdman are fabulous as they show the fusion and repulsion between a loving parent and daughter. Mark Burden and Colin Jeffery are perfect foil as the husbands on a hiding to nothing.  Melanie Dagg provides many laughs as the burlesque loving best mate. Special mention goes to Nathan Hussain as the psychology student who got the biggest laugh of the night.
The black and white set is a contrast to the brown and orange of Abigail’s Party. Stuart Taylor’s set revolves like the set of Blankety Blank to reveal another room. Dave Bailey’s lighting highlights the clean lines of the versatile set and the action within it.
No matter how cool we feel, our children will react like we did to our parents. The mismatch of cultures will always be a fertile ground for drama and Jumpy is a good example. The result is an entertaining evening at the theatre.
This review was written by Stephen Oliver for Jowheretogo PR (www.jowheretogo.com). Follow Jo on twitter @jowheretogo, Stephen @panic_c_button or like Jowheretogo on Facebook www.facebook.com/Jowheretogo.
Read the North East Theatre Guide preview: http://nomorepanicbutton.blogspot.co.uk/2016/06/preview-jumpy-at-newcastle-people.html
Tickets:
Jumpy by April de Angelis comes to Newcastle Peoples Theatre from Tuesday 14th to Saturday 18th June 2016 at 7.30pm
Tickets cost £13.50 (Concessions £11) – Box Office: 0191 265 5020 or online at www.peoplestheatre.co.uk
Posted by North East Theatre Guide at 00:43