Preview: Pride and Prejudice: The Musical at INTO Newcastle University

#Follow North East Theatre Guide on Twitter at https://twitter.com/NETheatreGuide and on Facebook at www.facebook.com/NETheatreGuide. Read about JoWhereToGo and its PR and photography services here.
Pride and Prejudice: The Musical
INTO Newcastle University
Friday 10th and Saturday 11th June 2016, 7pm 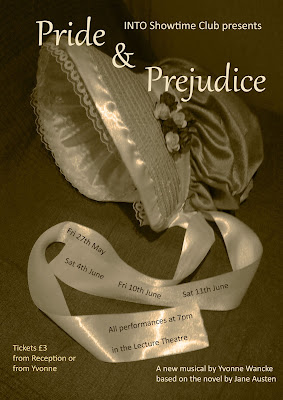 The international students at INTO Newcastle University will perform the world premiere of the show ‘Pride and Prejudice: The Musical’, composed, written and directed by Yvonne Wancke. The audience will be transported to the world of Jane Austen, complete with tailcoats and bonnets, songs and wit.
The show opens with Miss Austen, pen in hand, beginning to write her novel. We are introduced to the Bennet home, and then within moments treated to some beautiful Regency dancing at the Bingley ball, expertly choreographed by Helen Wilson, a north east based dance teacher. The piece takes us through the tumultuous love story between Elizabeth Bennet and Mr Darcy, meeting other characters along the way, all performed through acting and song to the accompaniment of a live band.
The INTO Student Production group is made up of students who are studying for the first time in the UK, as well as those who have progressed onto a range of courses here in Newcastle. It is a great way of making friends, having fun and learning to perform.
“It has been lovely watching this multi-national group of students make friends across programmes, with undergraduates and postgraduates mixing well with current INTO students.“ Hedley Sugar-Wells, lecturer and Mrs Bennet in the production
“It helped me to build friendship with other people in INTO or in university, and get to know each other during the rehearsals. It was challenging for me to sing or speak in front of many people, and I got used to it after performing several times. The teachers always encourage us and helped to build our confidence. It is a wonderful experience to be involved in the show.“ Hongyi Ge, student and Mary Bennet in the show
“Being an international student is about more, much more, than the eventual qualification.  Productions such as “Pride and Prejudice” (and we have had many!) give our students a completely different way to interact with UKculture.  Few things are more humbling than watching a group of our students produce theatre of this quality in their second language.  I remain in awe.” John Timney, Academic Director, INTO Newcastle
Tickets:
Pride and Prejudice runs for two performances; on Friday 10thand Saturday 11th June at 7pm. The venue is the INTO Building, Newcastle University.
Tickets (only £3) are available from yvonne.wancke@ncl.ac.uk
Posted by North East Theatre Guide at 21:53