Review: Made Up at Washington Arts Centre 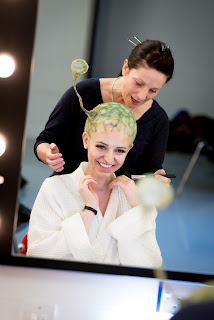 Written and directed by James Yarker
Make up design by Andrew Whiteoak
Design by Harry Trow
Lighting by Simon Bond
Costume by Kay Wilton
Photography by Graeme Braidwood
Made up is an intimate insight, not only into the behind the scenes world of cinema make up, but also into one’s own image and self-esteem.  This is not a depressing dive into the depths of the human psyche, rather it is a celebration of the resilience of the human spirit. 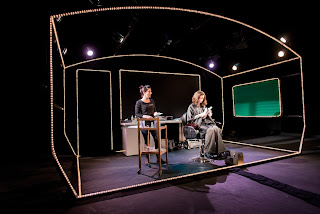 The show begins at 6am at the start of a new week on the set of a major film.  Make-up artist Sue arrives in her Winnebago and starts to set up her workspace ready for the arrival of young actress Kate. Kate arrives and she is feeling insecure as she feels she had a bad day’s filming previously. Compounding her issues about her own self image is the fact that she was caught by the paparazzi, sans make-up, going to the corner shop for a bottle of milk. Heat magazine have made a big deal out of a spot on her face. 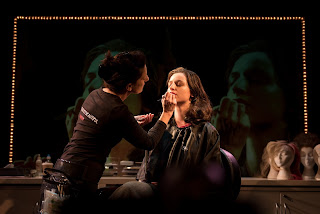 This is a fabulous show. The research by writer and director James Yarker has paid off as the relationship between the actor and their make-up artist is explored. At the risk of using make-up terminology: we are exposed initially to the foundation before the concealers are revealed. 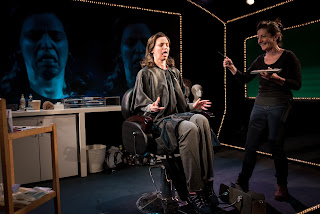 The performance works because of the professionalism of the two actors who pull off two remarkable acts. Alexis Tuttle has had to pick up the skills of the make-up artist and to try to act her way through the script whilst applying make up. Adding to the stress is the video camera that magnifies the image of her handiwork. 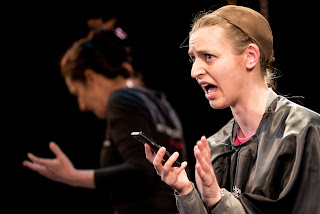 Equally challenging is the role of the star Kate. Emily Holyoake has to sit very still in a chair and draw the audience into her intimate thoughts whilst the eye liner is being applied.
The fact that these 2 performers are able to carry out their roles and deliver an engrossing performance is quite remarkable. 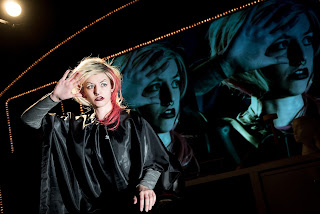 The stage design is made up of the outline of a Winnebago with lighting that indicates if the characterisation has changed. The back of the van has a large screen which for much of the show has 2 large close up images of Kate’s face. At times this had an Andy Warhol feel about it.

The radio at the back of the vehicle broadcasts adverts and talk-in topics that link in with the story.  They add to the overall feel of the narrative.    The final pieces of the jigsaw are a number of wigs which really do look good. This week the North East Theatre Guide team have been exposed to the awful wigs in Undercover Boss Canada and the designs used in Made Up are fabulous by comparison.
This is an intimate experience that celebrates the strengths of family bonds. It addresses a number of interesting issues over the culture of image. How does the press representation of celebrities affect our own image of ourselves?
Made Up is a fabulous show.  A great script and concept, linked to wonderful delivery by Alexis Tuttle and Emily Holyoake, has resulted in an enthralling performance.
This review was written by Stephen Oliver for the North East Theatre Guide from Jowheretogo PR (www.jowheretogo.com). Follow Jo on twitter @jowheretogo, Stephen @panic_c_button or like Jowheretogo on Facebook www.facebook.com/Jowheretogo
Read the original North East Theatre Guide preview:
http://nomorepanicbutton.blogspot.co.uk/2016/05/preview-stans-cafe-made-up-on-tour.html
Running Time 70 minutes
Suitable for ages 14+
On The Web:
@stanscafe | #madeup
www.stanscafe.co.uk
North East Tour Dates:
Thur 2 & Fri 3 June, 7.30pm – Arts Centre Washington
0191 561 3455 / www.artscentrewashington.co.uk
Tue 7 June, 7.30pm - Alnwick Playhouse
01665 510785 / www.alnwickplayhouse.co.uk
Wed 8 June, The Customs House, South Shields
0191 454 1234 / www.customshouse.co.uk
Thur 9 June, 7.30pm - Hartlepool Town Hall Theatre
01429 890000 / www.hartlepooltownhalltheatre.co.uk
Sat 11 June, 7.30pm – Seaton Delaval Arts Centre
0191 237 5460 / www.seatondelavalartscentre.com
Posted by North East Theatre Guide at 00:52