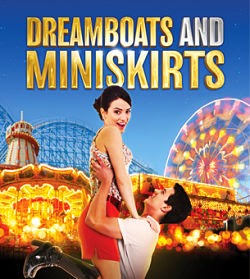 Washington born and raised Elizabeth Carter returns as Laura in a sensational new musical showcasing the biggest hits of the sixties is set to arrive in Newcastle next month. Dreamboats and Miniskirts, the sequel to smash hit fifties show Dreamboats and Petticoats will bring back ‘the summer of love’ to brighten dark January days! Catch it at Newcastle Theatre Royal from Tue 20 – Sat 24 Jan ’15.
Since its premiere in 2009 Dreamboats and Petticoats has become a musical phenomenon.  Originally inspired by Universal’s multi-million selling album series, it has now played to more than two million people across the UK and boasts seven double compilation albums and a myriad of one off special releases.  Now the creative team has reunited for the sequel – a super-psychedelic celebration of Mersey-beats and swinging sixties sounds.
Dreamboats and Miniskirts isset in 1963, when the world is changing. Bobby and Laura’s single “Dreamboats and Petticoats” is only half a hit. Norman and Sue have settled down to non-marital bliss – and a baby! And Ray and Donna seem blissfully happy…
The advent of the Beatles and the Merseyside sound is inspirational. But will it inspire Bobby and Laura to have one more shot at stardom – Norman to “get off the drains” and find that hit parade voice he has longed for, and Ray to realise his ambition and manage a really top pop act!?  All will be revealed in a follow up with the same wit, charm, and great songs as Dreamboats and Petticoats.
Dreamboats and Miniskirts is written by Laurence Marks and Maurice Gran, the team behind Goodnight Sweetheart, Birds of a Feather, The New Statesman, Shine on Harvey Moon, Save the Last Dance For Me and of course, Dreamboats and Petticoats, and is produced by Bill Kenwright and Laurie Mansfield in association with Universal Music.
Featuring hit after hit from Twist & Shout to Handy Man to Pretty Woman, One Fine Dayand many more, Dreamboats and Miniskirtsis happiness guaranteed.
The cast features Washington born and raised Elizabeth Carter (Save The Last Dance For Me, Dreamboats and Petticoats) as Laura, Louise Olley (Dreamboats & Petticoats) as Sue, David Luke (Dreamboats and Petticoats, Zaide) as Ray,  Ross William Wild (Grease; We Will Rock You) as Norman and Alex Beaumont (Aladdin & his Magic Lamp) as Bobby.
Jowheretogo Review from earlier in the tour: Dreamboats and Miniskirts at Civic Theatre
Tickets:
Dreamboats and Miniskirts appears at Newcastle Theatre Royal Tue 20 – Sat 24 January 2015 (Evenings: 7.30pm, Matinees: Wednesday & Thursday 2pm and Saturday 2.30pm).
Tickets are from £14.00 (a booking fee of 95p - £1.95 will apply to most tickets) and can be purchased from the Theatre Royal Box Office on 08448 11 21 21 or select your own seat and book online at www.theatreroyal.co.uk 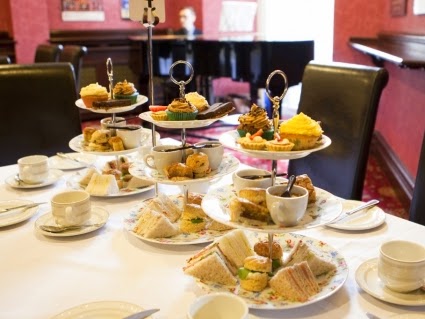 Afternoon Tea is available on Thursday 22 or Saturday 24 January after the Matinee. Enjoy a range of home-made and locally-sourced delicacies served on crisp white linen in our beautifully restored Upper Circle Bar, accompanied by a pianist. Only £14.95, or upgrade to an Afternoon Tea with Prosecco £20.90. Bookings can be made via the Box Office or Theatre Royal website.
Posted by North East Theatre Guide at 12:03