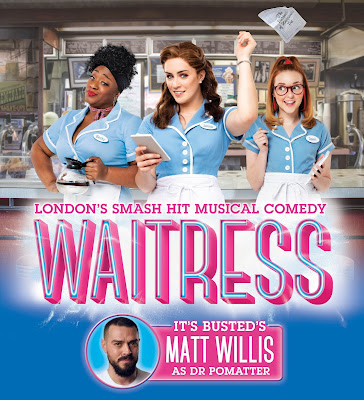 We had been looking forward to seeing Waitress after the reports from across the pond of its success on Broadway.  Critics had praised the entertaining score in the musical about life in an American roadside diner.  The show finally arrived at the Sunderland Empire this week and performed on the opening night to a packed house. We love checking out new musicals and so we're very excited to see what the fuss was about. 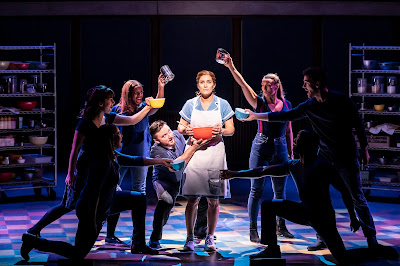 The programme carried little more than a cast and creatives list. There was no articles about the background to the show. I decided to do some digging about the story behind the musical.  It is based upon the 2007 film, also called Waitress, which was written by Adrienne Shelly. Before the movie was released, Shelly was murdered in her apartment and so she was unable to witness the success the movie had, taking $22 million from its $1.5 million budget. 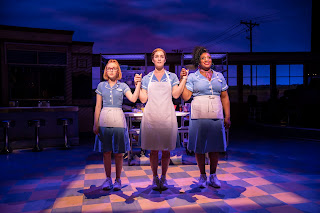 In 2015 the musical adaptation opened in Cambridge, USA before going to Broadway in 2016. This adaptation has music and lyrics by Sara Bareilles. The book is by Jessie Nelson, who, as her biography in the programme notes, spent 10 years as a waitress herself. The show went on to transfer to the West End of London in 2019, and had two successful pre-pandemic years there. 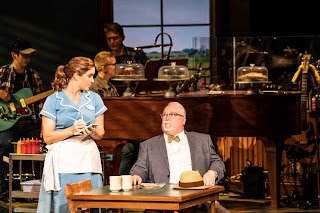 So what's the show about? Tales about waitresses in roadside diners are nothing new. From sublime 1998 film Mystic Pizza through to the dreadful musical adaptation of Happy Days, this has been a well used genre of storytelling.  Thus it is no surprise that the tale has a familiar feel about it. Three generations of waitress are working in a roadside diner that specialises in making pies, each waitress trying to make ends meet. 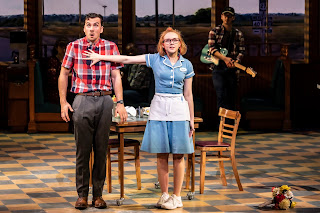 Evie Hoskins appears as the youngest, playing Dawn , a waitress who is trying to find love between her hobbies of collecting turtles and historical reenactments. The last time we saw Evie Hoskins was in the brilliant production of Carrie the Musical at the Southwark Playhouse. Thus we knew she was very capable of singing after witnessing her brilliant range before. 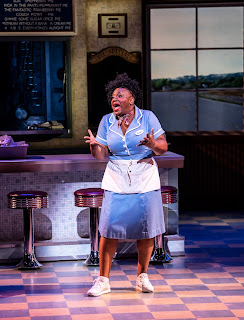 The, possibly, eldest waitress is Becky, performed by Sandra Marvin, who many in the audience would have recognized from Emmerdale. She is the sassy streetwise waitress who performs her duties with attitude and this results in many light hearted moments in the production. 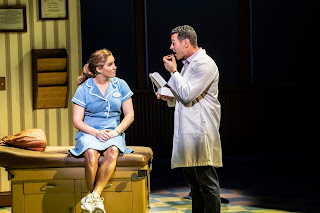 Then there is the middle waitress, indeed, the central character of the production, called Jenna. Lucie Jones, who was a finalist in The X Factor in 2009 and went on to represent the United Kingdom at the 2017 Eurovision Song Contest has her fair share of musical numbers as Jenna, and indeed, was ever given plenty of opportunities to belt them out. 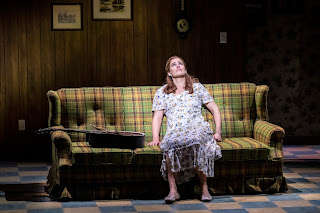 Jenna is married to Earl, who was performed on this particular performance by the very capable understudy Donal Brennan. The cover did a fine job of filling the shoes of the regular cast member. Jenna’s relationship with Earl appears somewhat abusive and it is no surprise when she announces that she plans to leave him. In making Earl’s character so controlling, the audience are quickly on the side of Jenna. 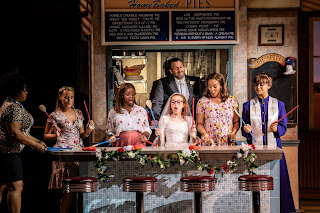 As recognized in Quentin Tarantino's Reservoir Dogs, waitresses in US are heavily reliant upon tips. That's why they guard their sections very closely and put the charm on in order to raise their earning potential. Jenna's husband, Earl, feels that he can help himself to her earnings because he is the man of the house. He is very possessive over Jenna and this is, at times, worrying. Very early on in the show, Jenna realizes she is pregnant after a drunkard episode with her husband. She is not pleased and quickly resolves that she needs to leave Earl. Indeed, she tries to keep her pregnancy a secret from the kitchen staff member Cal (Christopher D Hunt). 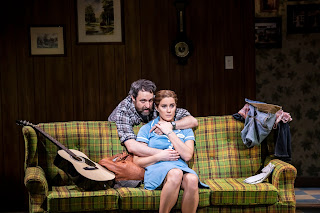 As someone who worked in a similar situation, I feel Waitress has an authentic feel about the dynamics of diner life.  You have the conflict between the kitchen and the floor staff. The floor staff are keen to maximize her tips, whereas the kitchen is keen to get the food out. In addition to the staff we have the happy customers and we also have the awkward types: the sort of person who wants their breakfast tomatoes on a separate plate and insists on having the water delivered first and the coffee arriving with the main course. One such individual is Joe, performed by Brookside's Michael Starke. Joe appears initially cantankerous. But Joe he tips well and is an observant chap who is won the first to recognize Jenna's issues. 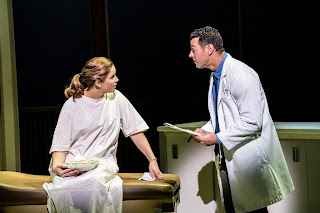 The final piece in the Waitress jigsaw is the doctor  to whom Jenna goes to for advice and medical support. Doctor Pomatter (Busted's Matt J Willis) has an interesting bedside manner. He  is assisted by nurse Norma who quickly establishes what is going on. The role of Norma gives actor Scarlett Gabriel opportunities for almost comedy bordering on farce. 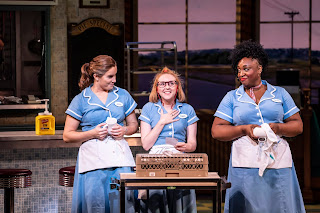 As I mentioned already, the workplace is a frequently visited trope. Workers trying to get on, making the most of their situation, trying to see humor in the customers and their fellow workmates. There is joy, in particular with Dawn's attempts at finding love. 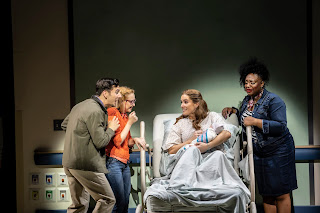 As I have already outlined, there is the trouble in the idea that Jenna's relationship with her husband is somewhat abusive. But there is also redemption as she is trying to escape, rather than accept, such a relationship.  The production gives the Sunderland audience plenty of opportunities to laugh. There's regular moments of comedy and the cast are very good at their timing to ensure maximum effect. 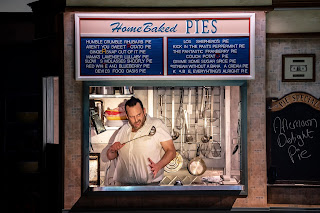 On stage there is a band, under musical director Ellen Campbell, which adds to the visual impact of the production. 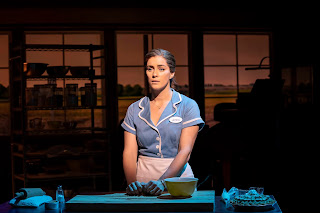 As somebody who likes tales of ordinary life, I was enjoying the show.  The one surprise, given the press comments that had from the Broadway production, were the songs themselves. A problem with many new musicals, and perhaps this has always been the case, is producing musicals with songs that are memorable. A brilliant production is one where you have an ear worm, a song that you sing in as you're leaving the theatre. The musicals with unremarkable songs tend to disappear from memory. Unfortunately, this production has very little in the way of memorable songs. They serve their purpose in delivering the exposition. They're also all very well sung and the live band to a brilliant job performing them. But there is very little about the music to recommend rushing out and buying the cast recording.  Having said that, in my opinion, I've got to say I did like seeing Oliver Copeland on his double bass under the streetlamp in centre stage for one the songs.  I also found Michael Starke's rendition of Take It From An Old Man as one of my personal highlights of the show. 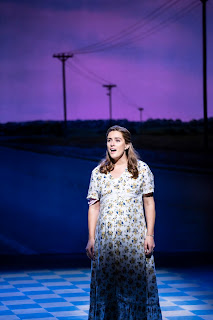 Lucy Jones, as you could imagine, is a very accomplished singer and is given plenty of opportunities to show off her range. Likewise Matt Jay-Willis has the opportunity to feature on a couple of occasions, which clearly went down well with the audience. 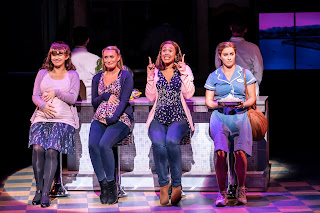 So there you have it.  A tale which is in itself entertaining, but nothing that original. Songs which are very well performed by both musicians and singers are like. But they are not particularly memorable.  And yet somehow, putting the package together, it made for a very pleasant Monday evening's performance. The whole was better than the sum of the source material. 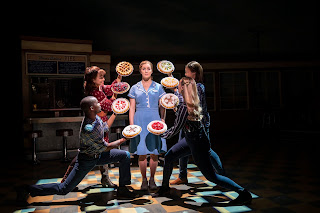 Some critics may criticise it for being a bit too formulaic but, just like your average soap opera on television, stories about normal people doing normal stuff have been popular as long as storytelling itself.  In normal human lives, there are stories to be told.  Waitress is a decent attempt at pushing such a story across thanks to great performances by all involved and a bright colorful set and costumes. 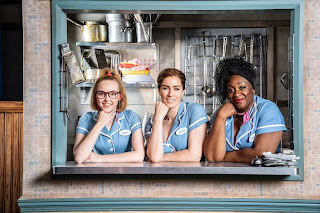 Tickets available in person at the Box Office on High Street West, or online from our affiliates ATG Tickets: https://tinyurl.com/WaitressSunderland