A brand new Christmas show for all the family is coming to the Queen's Hall from 10-28 December, with early bird tickets on sale from 30 September. The Remarkable Robin Armstrong’s Extraordinary Christmas Adventure is written by Elijah Young and directed by Mark Calvert. 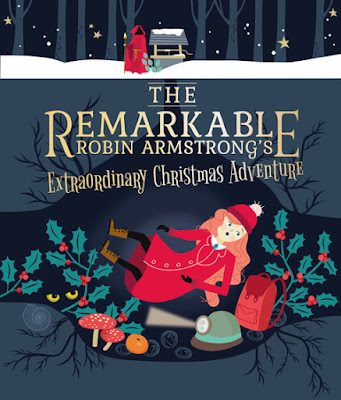 “Magic is for those who wish to see it…” Robin Armstrong is an adventurous young girl obsessed with all things magic, who lives in a northern mining village famous for its fairy tale and folklore. Join Robin for an extraordinary adventure as she discovers magic and the power of friendship. Let’s see if she can save her Grandma just in time for Christmas…

North East playwright Elijah Young has been commissioned to write the show. An Associate Artist at Live Theatre Newcastle where his writing was first performed, in 2019 he was Young Writer in Residency at the Customs House Takeover festival, his play Isolation premiered at Alphabetti Theatre and he was named the British Theatre Guide's Most Promising Newcomer. He was recently selected to be a part of the BBC North East writers development programme, and this is Elijah's first Christmas commission. He says, ”Writing this show has been so much fun. It's a modern fairytale that will give you all the Christmassy feels and you will fall in love with our main character.

It’s for kids but most definitely for adults too - there's something for everyone, and it's the kind of show you want to go as a family to watch. And it's magical, who doesn't love a bit of magic?! I can't wait to share it with audiences at the Queen’s Hall!”

The creative team includes Director Mark Calvert who has a strong track record, having directed large scale family Christmas shows for five years at Northern Stage, including The Wizard of Oz, James and the Giant Peach and A Christmas Carol. Mark says, “The message at the heart of this show is the importance of family and holding onto the idea, for as long as you dare, that magic does exist in our sometimes humdrum world. The show is set in the mines of Northumberland but they’re not the mines we all know. These mines are full of magic and adventure, populated by goblins, wizards and faeries who help and hinder our heroine, so she can find her way home. It has all of the ingredients of a great Christmas tale and Elijah and I, along with the rest of the creative

team, are working hard to give Queens Hall audiences a proper theatrical treat.”

Elijah and Mark are joined by Set and Costume Designer Amy Watts whose credits include The Hound of the Baskervilles/Northern Stage and West End Girls/Live Theatre; Sound Designer and Musical Director Jeremy Bradfield - a composer, sound designer and performer specialising in multi-instrumental live music for theatre, his credits include The Three Bears at Christmas/Kitchen Zoo and James and The Giant Peach and The Wonderful Wizard of Oz for Northern Stage; and Movement Director Martin Hylton - Rehearsal Director at Phoenix Dance Theatre and Gateway Studios

Artistic Director, Martin’s theatre credits include The Snow Queen for Northern Stage. The cast will be announced in October following an open casting call for North East actors.

Katy Taylor, Artistic Director/Chief Executive of Queen’s Hall Arts said, "We’re delighted to welcome local families back to the Queen’s Hall this Christmas with a magical festive show for the whole family set in the North East. And we’re really excited to be working with such a brilliant team and our co-producers at Alnwick Playhouse to create Remarkable Robin here in Hexham, our audiences are in for a real treat!”

The Remarkable Robin Armstrong’s Extraordinary Christmas Adventure is at the Queen’s Hall from 10-28 December and is suitable for all ages. Tickets start from £12.

For more information or to book tickets visit www.queenshall.co.uk or call the box office on 01434 652 477.