The Drifter’s Girl has been premiered at Newcastle’s Theatre Royal over the last couple of weeks and guest reviewer Steve Colman took a break from presenting the region’s favourite breakfast show on Smooth Radio to see it.

When you see a new show like this there is the question you always ask; Where did they begin for this? Obviously the songs had been around for many years but does the dance or perfecting the vocals come first. Whichever way, they have perfected the whole show which melts together with brilliant fluidity. From the moment the opener "Hello Happiness" starts up until the finale of "You're more than a number" you are transported back to another time. Overall they are fun times but a visit to Tennessee in the 50's and early 60's was not a welcome one for the black skin at the hotels who didn't want to be a part of the Drifters rise to stardom. Also along the way we lose certain members of the group like Ben Nelson who wants a pay rise for all the hard work he is doing, doesn't get it, so he takes his song "Stand by me" and changes his name to Ben E King, has that one hit instead of the many hits that the band justifiably had. You don't mess with The Drifters Girl. She is their guide managing those who want to be managed and discarding them if they get it wrong.

There's a little trip to the UK to meet the two Rogers - Songwriters Greenaway and Cook which provides some amusement seeing the guys slipping into their upper end English accents whilst wearing their bowler hats and carrying their much needed brolleys. Well it is England.

This is primarily a fun show but it has some historic social problems to share. Add the brilliance of Beverley Knight with the usual life and death emotional problems she and we can encounter, then mix in the superb quality of the group's members; this show is a hit !!! A big sound with 9 musicians on and off stage. 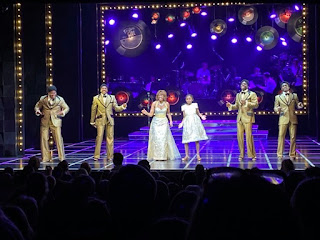 It's off to London after it finishes at Newcastle Theatre Royal Saturday and looking at ticket sales it could have stayed here for much longer,  we could have asked them to "Come on over to our place".

Tickets are available online from the theatre: https://www.theatreroyal.co.uk/whats-on/the-drifters-girl/