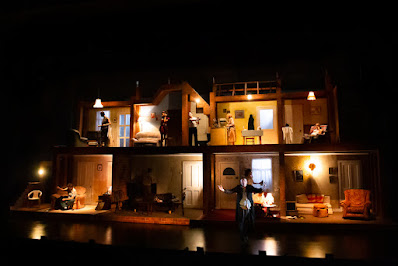 Road is the first show from the Northern Stage's new Artistic Director Natalie Ibu, which is part of Northern Stage’s Housewarming season. It was a welcome return to the wide Stage 1, a venue we last visited in December 2019. The last 23 months have been a wake up call for many and the conversations before the show included the strong desire to get back to theatre. 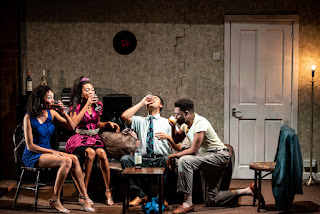 As a fan of both 1960s kitchen sink dramas and the Channel 4/Film Four output of the 1980s the concept of a play about toughing it out on a northern working class road sounded right up my street. This is an ensemble piece, with a number of the ten strong cast playing multiple roles. The cast worked really hard through the show that ran for three hours on press night. Normally I'd plus interval but, no, this cast continued entertaining the audience through the interval too. 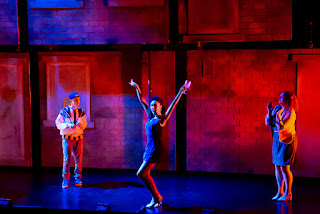 The set, designed by Amelia Jane Hankin, takes advantage of the size of the stage with one row of rooms nestled above the other, each house on the road being represented by a single room. The ground floor rooms also moved towards the audience when they become part of the focus of attention. The lighting felt different to the usual set up here with fewer obvious lights above the audience than in past shows. Zoe Spurr's lighting design picking out the relevant action in revealing ways.

I did like the costume design, also from Amelia Jane Hankin, which nicely captured the clothing of 1986. That era's jackets were about more than shoulder pads and the styles used in the scenes after the pub closed brought back a number of memories.

Natalie Ibu's programme notes state that Jim  Cartwright's story was based originally in Lancashire but has been moved to the North East, as was made abundantly clear in Rosie Stancliffe's opening few lines. Ibu also notes that the play is about "a working class community dealing with poverty, unemployment, disappointment and a desperation for change." Whilst there are some lighter moments including the Road's inhabitants going out on the lash, a dog helping themselves to a take away or an elderly resident hunting down milk, it is a tough watch. Think more Eastenders than Coronation Street. 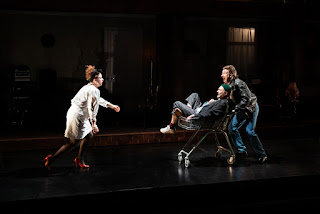 Having said that, I will agree with one departing audience member who described it as "epic". This is a kitchen sink drama on an epic scale. The caveat to that statement is that it can become challenging to follow the lives of a large number of characters and sometimes one wonders what is actually going on.

That is not to say that the cast don't do a great job in the monumental task of bringing the tale to the stage. The individual parts are well executed but I do wonder if it would benefit from trimming down and basing it on fewer components. I stress that this is just my thoughts as I leave the theatre and others will have their, equally valid, views.

There were some nice touches when the action, especially in the second act, breaks the fourth wall. The sale of chips spills over into the audience, or the row between a couple using the spaces around and above the audience help to engage the audience. It looked like there was a school or college party in at the front and they appeared to be really enjoying their live theatre. 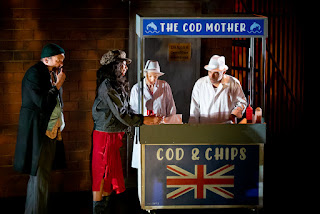 Northern Stage has always had a brave attitude to the shows that it presents. I have seen some of the best theatre at this venue in the past 30 years. This play makes a clear opening statement that Northern Stage is going to continue to lead on baring the realities of life in innovative and daring ways. The venue returns after lockdown with a mission to reflect the society it serves.

14+ (contains strong language, onstage drinking and smoking plus a number of some upsetting scenes)