Our first visit to Newcastle’s Live Theatre since the pandemic started and it was a chance to see a double bill of new writing. 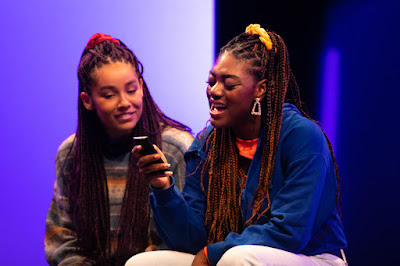 As the interval started I became aware of a anti-covid measure that Live Theatre have introduced, they are blowing lots of cold air into the venue. Thus it was the second theatre I've been to this month in which I had to put my coat on, fasten it up and wish I had brought a jumper along. Perhaps they wanted us to feel that we were literally outside on a Duke of Edinburgh camp in the middle of Autumn? 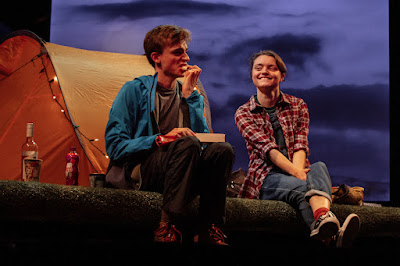 Bean (Jackie Edwards) is the first to set up camp. Eventually long time childhood friend, Will (David Fallon), turns up. Will dislikes slugs it seems, in fact he  appears at the tent armed with plenty of hand sanitizer. He is concerned that Bean is not taking the expedition seriously. He needs to complete it in order to improve his chances of getting into Durham University whereas Bean is happy to feast on golden syrup and Hob Nobs. They both await Dean who is not just another camper, he is also Will's best mate and Bean's boyfriend.
This play explores the potential differences between life long childhood friends who may be growing physically but are not necessarily maturing mentally at the same rate. It nicely introduces us into some of the childish quirks that still form part of their rituals but there are early signs that their patience for one another isn't what it used to be. Will comes across as no fully appreciating the emotions of those around him. Bean is still in touch with the fun side of her inner child. The shiny stage design by Anna Orton has now revealed an area of mud that Bean is happy to walk barefooted in.
Bean reveals a bottle of wine which is a turning point. This is a moment in time when the harsher truths of growing up are revealed.
Jackie Edwards puts in one of the best performances of the year that we have seen so far as Bean goes through a multitude of connected emotions. In a year in which #MeToo has evolved into a conversation about teaching boys about acceptable conduct and behaviour Cheer Up Slug is a timely reflection on the problems faced by girls. Tasmin Daisy Rees' play is powerful tour-de-force and the audience were enthusiastic in their applause at the end, recognising the performances of both Edwards and Fallon.
Both plays are blessed with great acting and thoughtful direction from Kemi-Bo Jacobs & Anna Ryder. Theatre is able hold a mirror up to the less comfortable elements in the world we live in. However it is still possible to feel entertained. Braids has a pleasant redemptive feel and Cheer Up Slug had a number of early laughs for the audience. Newcastle's Live Theatre is back and it is a return to championing challenging new writing - long may that continue.

The following performances will remain socially distanced even if guidelines change: Wed 13 Oct at 7.30pm and Thu 14 Oct at 2pm.