It was a last-minute decision, just like last year. We booked to see the final performance of the Stand Panto. We had fun last year and were in need of cheering up. As it happens, they've kept the magical formula of keeping it funny (not always remembered in panto) and we left with smiles on our faces. So, just like Cinderella, we believe in magic too! We don't normally talk about the start of pantos as they usually follow a similar format of introductions and exposition. But there again, pantos don't usually start with checking out last year's reviews... 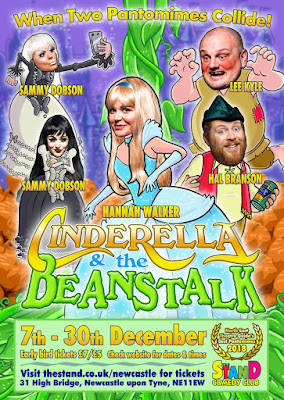 Lee Kyle, one of the region's most naturally funny people, starts by warming up the crowd. It is great being under 13. My 16-year-old agreed about turning gothy in his outlook even if not his musical tastes. Before long all 4 actors are on stage and wondering if they can create the best panto in town? No. What about the second best? No. Then up pops our tweet from a year ago calling last year's Snow White 2 the third best show in the North East complete with fanfare. Here's the point, for us: it’s not about budget – it’s about entertainment. Once again, they kept the Stand crowd laughing. Sometimes it was mainly the kids. Other times it was mainly adults (crisps anyone?) However, for the bulk of the time it was everyone. Some pantomime conventions are kept in but the dodgy casual sexism, racism, misogyny and homophobia, which can creep into shows, are out. So. That title. This is a story mashup. But rather than call it Beanstalk 2 we have Lee Kyle as Andrew the giant. Andrew is the son of the giant killed by Jack. Hal Branson plays Jack, so his character killed the Giant's Dad. So far so good. The pair of them then stumble over Cinderella (Hannah Walker) who is being bullied by ugly twins Salt and Pepper (both performed by Sammy Dobson) as they have been invited to the Prince's ball. How do you get twins performed by one person? Use a large television screen for one character if they both need to appear and ensure that they have very different personalities. Salt is the abrasive chav. Brilliantly observed in terms of speech and attitude. Pepper is the more thoughtful goth. You kind of know that she’ll come good at the end. The differences in these two characters is an indication that this is a fresh story, credited as written by the cast, that isn’t shunted onto a set route by previous takes on the tale.

The television comes handy two for some location shots, at Newcastle Castle, with cast members who are not present in the flesh. For example Games of Thrones star Ben Crompton appears as the King, Amy Gledhill as the Fairy Godmother, and Katherine Tanney spits venom as Cinders’ new Stepmother. 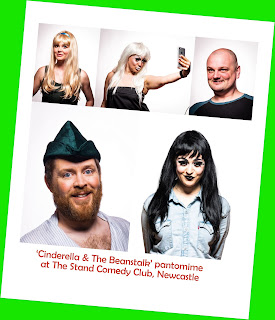 Once again, Lee Kyle has been weaving his magic with lyrics for the songs as they occasionally pop up. You end up with a classic track that you will recognise the music too but with new lyrics that fit the story. This includes a reworking of a Sex Pistols hit. Do I ever feel cheated? Not in the slightest as the songs were a laugh for the audience. The natural comic talent on stage being more than comfortable with encouraging audience participation during some of the hits.

No panto we’ve seen is perfect. For my penny’s worth (not that anyone is asking!) I would have gone to the interval a couple of scenes earlier rather than leaving poor Cinders tied up and the younger members of the audience worried about her future. Going much longer than an hour with a young crowd can always be dangerous if their bladders are full of pop. This was, at 2.45 hours, our longest panto of the season. Now you could argue that this was added value for money. Even so, it might have benefitted from a little trimming around the seams the get the timing down a little.

This was a fabulous afternoon at the Stand. It may be on a tight budget, but the show has been carefully crafted by a local professional team that have paid attention to detail. This is a great hardworking little cast. At the end of the show the audience left with big smiles on their faces and it didn’t cost a fortune. In the rich variety of panto in our region, there is a place for a genuine low cost, well written and funny panto that relies on good laughs rather than special effects to provide the wow factor. Let’s hope they return next year.

And for what it’s worth: my young companion has rated this show his favourite of the season. So you’re going to have to change that jingle.