Situated in a gymnasium at the Gateshead International Stadium, Cinderella appears in a pop-up theatre venue during December. Produced by a team that are no strangers to creating pantomime in the region, having staged panto at the Tyne Theatre & Opera House for 21 years until 2016 before moving here. This show is a traditional panto that reminds me of the shows I saw as I was growing up. 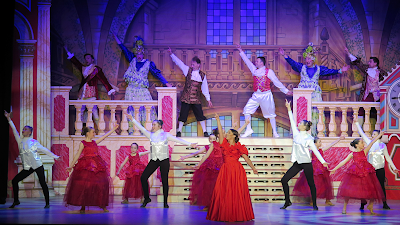 Here’s the thing with pop up panto – turning a large gym into a theatre venue is a challenge. Adding a stage and seats is one thing, importing the light and sound equipment is quite another. The lighting was perfectly adequate for the scale of show. The sound design meant we could hear what was being said but the natural acoustics of the gym meant there was no concealing the normal use of the venue. But on the up side, we were able to pick up a free parking spot in the car park as the venue is used to handling large scale events. 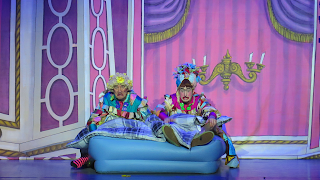 Cinderella features local actors, many of whom have appeared in a large number of shows in the region. They understand the audience and know, for example, how the pronounce the local expressions. The local flavour is prominent throughout the show thanks to the production’s writer, director and co-producer Maxie Peters, who also appears as an Ugly Sister Sharon.  His co-Ugly Tracey, Finbar Healy, clearly picked up some comedy tips from his great late father Brendan Healy, who would have been proud to see his son entertaining the people of the North East. 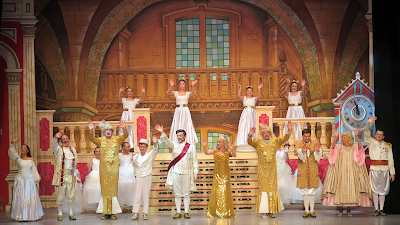 Showing off his usual charm was Jamie Brown as Prince Charming, though this panto also gives him to show off his singing ability too. Both he and Jacob Anderton, as Dandini were able to add glamour and good humour to show.  It was nice to see some strength in character applied to these roles compared to show Cinderella’s we’ve seen over the years. Of course, you want Cinderella to turn from poor maid into the enchanting and magical princess and Emily Swan was able to pull this off whilst making a great onstage partner for the Prince. 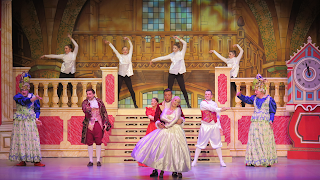 Lewis Jobson works hard in the comic role of Buttons. Between firing water pistols and sweets at the audience, he was able to get the kids on side. I’m no fan of Baby Shark but it had the youngsters excited as Lewis left the stage.  Another performer, who showed that they were capable of both very entertaining singing and dancing, Sherrie McKale, has potential to be a good lead in the future. Having said that, a couple of dance routines did little more than pad the show out, making the show one of the longest running times that we’ve encountered this season. Thriller in particular seemed an odd thing to happen in the Ugly Sisters bedroom at the moment it did.

Of the more successful routines, the 12 Days of Christmas was canny and produced a positive reaction from the audience who enjoyed the chaos as it went on. 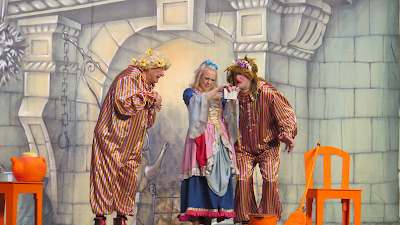 Many of the jokes are out of the panto archives, which isn’t in itself a problem as many pantos trot out the classic funny lines knowing that they’ll illicit a laugh or a groan from the audience. However, in a very competitive market, I’m not sure this pantomime particularly stands out from the pack. This is a shame considering the effort that goes into staging and performing it.