REVIEW: Beauty and the Beast at Hartlepool Town Hall Theatre

A fine pantomime opened this weekend in Hartlepool. A talented hardworking cast, accompanied by the best bunch of young dancers we’ve seen this season, deliver a funny show that is packed full of songs and mischief. The show gets a thumbs-up from us.

When does a panto turn in to a musical? When does a musical turn into a panto? This show for one, packs in more songs than any other. Certainly, the producer gets his money’s worth out of the dancers. It is a good job too that the young dancers were the best we’ve seen this season. (I seem to recall saying something similar a couple of years ago when they did the first panto in Hartlepool.) Old school panto fans will call them ‘babes’ but each one did a brilliant job sticking to the routines – and there was plenty of them as this show seemed saturated with songs. Having said that, it kept to 2 hours 20 – including interval, which is, as our regular readers will know, what we consider the sweet spot for a running time for a panto with lots of kids in the audience. 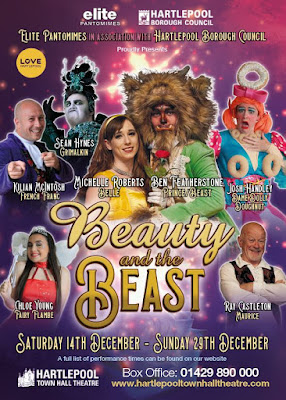 The story for Beauty and the Beast is less fixed than the narrative for many pantos. A quick check on the history suggests that the basis of the story dates back around 4000 years though the 1740 version by Gabrielle-Suzanne Barbot de Villeneuve is, for many, the basis of the modern version. Of course, it is the 1991 Disney movie that will be known to the kids in the audience today (though for me it was the Ladybird book in my library that I remember).  As with Aladdin, Snow White and others, you cannot escape the magnetic attraction of the Disney version. So, whilst we are spared dancing clocks and crockery in Hartlepool, the father is an inventor rather than a merchant. We also have Belle meeting the Prince before the curse is put upon him. Having said that, the narrative of this version does flow well and makes sense – and making sense isn’t always guaranteed in panto.

Fairy Flambe (Chloe Young) appears on stage first, with a plume of smoke, to introduce the kids to a little bit of French and to set the scene before the evil Grimalkin (Sean Hynes) makes her grand appearance to a chorus of boos from a Hartlepool audience that is well up for enjoying the show. As we’ve witnessed over the past month, a lively or a quiet audience can be the difference between a great panto and an experience that falls flat. 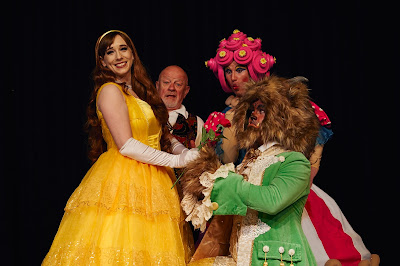 In the village we meet Belle (Michelle Roberts) and her inventor Dad Maurice (Ray Castleton), as well as two of the staff at the princes’ castle, comic French Franc (Kilian McIntosh) and Dame Dolly Doughnut (Josh Handley).

In this story the pre-cursed Prince (Ben Featherstone) goes for a wander and he meets up with Belle. He also meets up and falls out with the wicked witch Grimalkin who puts a curse on him for rejecting her advances.  He retreats to the castle meanwhile Belle sends her Dad off to find a rose before he leaves, to as he needs to take his invention to Le Dragon’s Den in Paris.  This puts Dad and Belle on collision course with the angry Beast but fortunately castle staff Franc and Dame Dolly are there to assist. 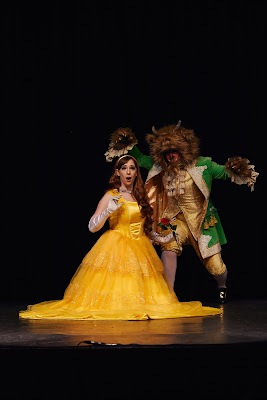 This is an unusual panto cast. It feels more uniform than most shows. The lack of cast inexperience, especially from some “star” that has only got their role as they’re known on TV and it is hoped that they’ll sell tickets, ensures that you don’t have someone carrying a weak link on stage. Everyone who was expected to sing, could sing. The good people clearly were, the funny people were funny and Grimalkin was suitably evil (even bordering on likeable!). No one was trying to steal the limelight. No one was hiding behind the experienced panto performers. It felt much more of a team on stage. Credit where it is due: the cast were excellent.

We have witnessed one dodgy fairy this year and so it was pleasing to witness something magical about Chloe Young’s performance. Comic Kilian McIntosh quickly got the kids onside and laughing even when they were a little unsure at the start. For this is a safe panto for the young ones. Any dodgy jokes always getting clipped before their obvious punchline, just like Les Dawson used to on pre-watershed tv. Dame Josh Handley, likewise, smashed through the fourth wall and involved poor Richard, a member of the audience who was a good sport, just the right number of times. 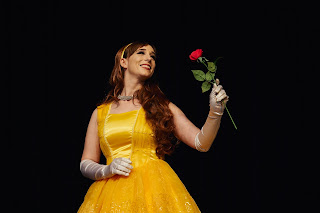 For the magic of panto to work, there has to be an acceptance that Belle would fall in love with the Beast. The audience has to care about these characters. It worked in Hartlepool. I know as I heard a panicked young voice behind be exclaim as the rose was dying away. They were caught up in the tension of whether or not the couple would reunite in time. Sweet. Michelle Roberts and Ben Featherstone had enough onstage chemistry to bring the story alive.

So, we had a good storyline, good singing, good dancing, a hardworking and talented cast in costumes that looked glamorous plus that all important element: an audience that wanted to enjoy itself. Cheaper than a trip to the football and ice creams at just £1.50 a go means it is at the more affordable end of the price range without feeling cheap.  All in all, a canny,  enjoyable panto.