‘With his electric shock hair and plugged in eyes, Bailey is an unstable chemical reaction contained behind a rickety, paper-piled desk.’ Exeunt Magazine 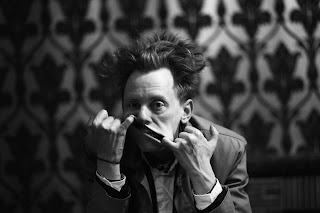 Following the success of his award-winning cult hit This Is How We Die (‘blisteringly brilliant’ ★★★★ The Scotsman) and the critically-acclaimed Kissing The Shotgun Goodnight (‘a hallucinatory journey of dark intensity’ ★★★★ Whatsonstage), writer, performer and musician Christopher Brett Bailey appears for the first time in Newcastle this October, bringing his latest show Suicide Notes… the spoken word of Christopher Brett Bailey to Northern Stage.

Suicide Notes… is a different-every-night performance of poems and short stories drawn from Christopher’s most recent collection, published by Oberon Books earlier this year; a linguistic kaleidoscope of caustic cartoons, crackpot prophesies and demented erotica, described by The Stage newspaper as ‘intimate, intense, electrifying’ ★★★★. 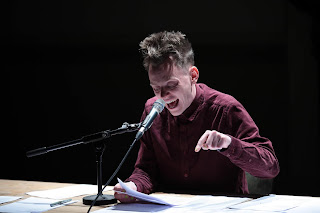 Sat behind his trusty desk, Christopher veers between potty-mouthed poet and a standup comedian from hell, delivering a one-night-only collection of tall tales and true stories, pitch-black jokes and fork-tongued poetry as a way of exploring, with blisteringly dark humour and moments of unexpected candour and beauty, the subject of death; a recurring spectre in all of Christopher’s work.

Christopher is a writer, performer, theatre-maker and musician. His critically acclaimed solo debut This Is How We Die received the Arches Brick Award, an Off West End Award, and was shortlisted for Stückemarkt, Berliner Festspiele. Performance credits include work with BBC Radio 4, Unicorn Theatre and the late great Ken Campbell. Bailey is also half of ambient music duo Moon Ate the Dark, and leader of guitar-noise project This Machine Won’t Kill Fascists But It Might Get You Laid.

The show begins at Northern Stage at 8pm. Tickets are from £10
Box Office: 0191 230 5151 or online at https://www.northernstage.co.uk/Event/suicide-notes-the-spoken-word-of-christopher-brett-bailey.
Posted by North East Theatre Guide at 18:35