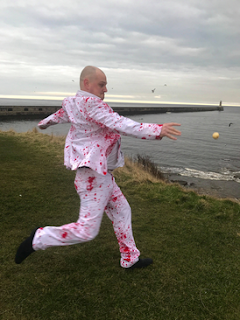 It may have been 1015 on a Sunday morning but the room was full to bursting as Lee Kyle appeared to start the show. Not just seats filled, we had the floor full too. Fortunately this karaoke room came with air conditioning unlike some of the venues we would visit later.

Kyle is an immediately likeable chap who quickly has the rapport and trust of the audience. Writing this review after we have returned from Edinburgh, we appreciated just how good he is at quickly winning an audience around. Our later shows would include some acts who just didn't know how to handle an audience. Unlike a local North East gig, this wasn’t a room full of friends, this was a crowd that needed impressing and sure enough Lee did this.

This is the best show we have seen Lee do to date. It is quite a personal show. Lee discusses his time in wrestling, his upbringing, his family and coping with autism within his close family circle.  His genuine open style doesn't offend and you could feel the warmth in the audience’s reaction. But Lee doesn’t go for quick sympathy votes nor does he forget to be funny. Despite the intensity of the material often being covered, he makes the room laugh with almost everything he says, and that takes skill.

We like Lee Kyle a lot and he is well worth getting early to see (in our case, leaving Gateshead at 6am!)