The Great Joe Wilson is a must-see comedy drama set in Darlington and is heading for a world premiere at Darlington Hippodrome on Friday 7 and Saturday 8 September. 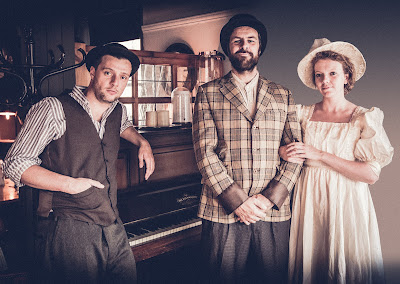 The Great Joe Wilson is a play with music about (arguably) the greatest-ever North East singer/songwriter. Wilson's dramatic life will be told using his tremendous music, which covers everything from lost love through to hard-hitting songs condemning domestic violence and supporting striking workers. Joe performed in Darlington at the Theatre Royal Music Hall.

Joe Wilson died in 1875, aged only 33, but during his brief life wrote 360 songs, many of which are still popular today: The Unthanks recorded Gallowgate Lad in 2011, Keep Your Feet Still, Geordie Hinny has been covered dozens of times and Sally Wheatley is a staple throughout UK folk clubs.

Tickets:
For more information or to book call 01325 405405 or visit www.darlingtonhippodrome.co.uk.
Posted by North East Theatre Guide at 17:45