Roll up, roll up to see some very special characters make a return to the city, as a troupe of marionettes perform at Arts Centre Washington on Saturday 8 September. 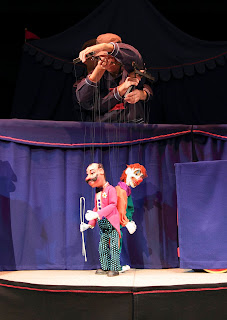 For the ringmaster, lion, acrobats and other puppets that form the cast of The DaSilva Marionette Circus Troupe were actually created many years ago by the founders of Norwich Puppet Theatre, Ray and Joan DaSilva.
The DaSilva Puppet Company performed their large scale theatre shows throughout the seventies with annual visits to the North East performing at both the Sunderland Empire and the Darlington Civic Theatre

Their son Nik Palmer has followed in their footsteps as a puppeteer and - together with fellow puppeteer Sarah Rowland-Barker - he is presenting a second generation of their travelling show.

Mr Palmer, 54, who runs the company Noisy Oyster with Ms Rowland-Barker, said: “The puppets are more than 50 years old - my parents started building them just before I was born and they must have toured the show for a good 40 years.  They are all the original puppets although they have had a few costume refurbishments - my mum still refurbishes the puppets’ costumes.  There’s about 18 puppets in the show and they are all trick marionettes.”

About how the performance today compares to the original show, Mr Palmer said: “We have changed a few bits from when my parents did the show.  They did it very straight and were dressed in black whereas we are dressed in costumes and are very much part of the performance.”

He added: “It is one of our most popular shows now and I really love doing it - it is good old-fashioned entertainment suitable for all ages, young and old.  It is especially popular with this year being the Circus250 celebrations.”

Ray and Joan DaSilva, who now live in Dorset, founded The DaSilva Puppet Company in 1962 and the company toured the world with its shows “The trick puppets, most of them now in new costumes, are as lively as they always were despite much hard work around the world.”
Tickets:
The DaSilva Marionette Circus Troupe perform at Arts Centre Washington on Saturday 8 September, 11am + 2pm, tickets are £7 / £25 (family, admits 4) and are available to book at www.artscentrewashington.co.uk or by calling 0191 561 3455.
Posted by North East Theatre Guide at 20:37