Preview: A Way Home - The fight for a place to belong ON TOUR

A Way Home - The fight for a place to belong 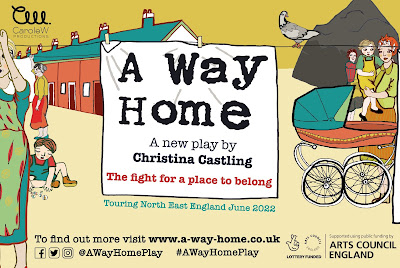 In 1951 a third of the villages in County Durham were classified as ‘D’ - no longer deemed worthy of investment and expected to die quietly. Over the next 25 years local communities fought to save the hundred and twenty one villages that eighty five thousand people still called home.

This county-wide fight has been brought to life in A Way Home a new play by Christina Castling, which shines the light on the true stories and memories of the people who called those category ‘D’ villages home.

Audiences at theatres and community venues across the North East of England are being invited to pull up a chair at Bet’s kitchen table and join her as this epic battle is condensed into a 12 month journey for one family. Told with humour, tenderness and not a small amount of grit, A Way Home explores what identity, loss and belonging really look like.

As playwright Christina Castling explains: “As someone who has spent the last 16 years living in County Durham I was shocked when I first came across the story of category ‘D’ villages and the huge impact this town planning decision had on the communities in a place I now call home.

“I spent four years researching and working with community members across County Durham: capturing their stories, inviting them into the rehearsal room and using their feedback to help shape the play. In January 2019 an early draft of the play was shared with an invited audience. The response was overwhelming. The play was originally due to take to the stage in June 2020 but our plans were thwarted by Covid-19. Nearly 2 years on we’re really excited about bringing this emotive tale of what it’s like to find yourself fighting to be heard when no one is listening, of holding on to the past and of finding a place to belong, something we feel is just as relevant now as it was 60 years ago.”

County Durham was the only area in the country to make such a town planning decision. Under category ‘D’ of the plan all capital development and building was to cease. Slowly these villages were to be demolished. In the end very few were and, over 60 years later, the ones left standing have their own stories to tell.

Christina added: “Involving local communities in the process of creating the play was key to ensure that it would be as authentic, meaningful and accurate as possible. Without their generosity A Way Home would be a very different play. We’re thrilled to eventually be able to share the end result with audiences at Theatres across the North East this June but also, importantly, that we will be returning to the communities that this story belongs to.”

A Way Home was co-commission by Queen’s Hall Arts Centre Hexham and Gala Theatre, Durham and has been made possible with support with public funding from Arts Council England as well as funding from Newcastle University Institute for Creative Arts Practice, Sunday for Sammy, Catherine Cookson Trust and Northern Bridge Consortium.

For more information about A Way Home and for details on how to buy tickets visit www.a-way-home.co.uk