(though that is unlikely)

The Book of Mormon 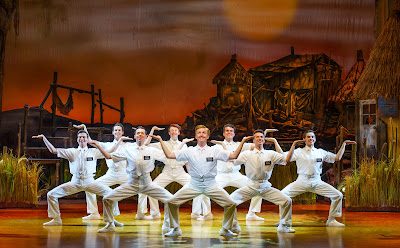 Possibly the rudest musical to hit Newcastle this year has landed at the Theatre Royal for a three week run. It was very popular on the first visit to the North East with a number of people I know wanting to see it again, including one who doesn’t normally like musicals. Gauging by the packed opening night word-of mouth has clearly spread that this is a must-see show. 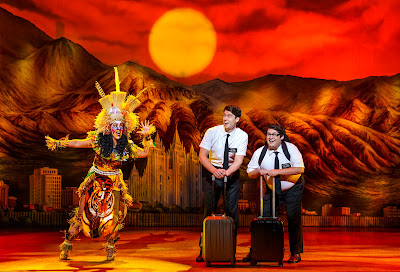 So the first point is going to be: “who will enjoy it?”   Trey Parker and Matt Stone are two of the writers behind it and they are the creators of South Park. The other is Robert Lopez, whose previous work includes Avenue Q. If you are on the wavelength of the Team America / South Park movies and / or Avenue Q then you are probably going to love the show. Having said that…I won’t be recommending my elderly parents see it! Nor would I take young children. There is a lot of swearing and sexually explicit dialogue. 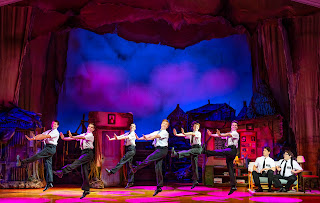 The Book of Mormon focuses on two 19 year old members of the Church of Jesus Christ of Latter-day Saints as they go out from Mormon training school to Uganda in order to spread the word. The contrast could not be greater between the leading star Elder Price (Robert Colvin) and the bumbling Elder Cunningham (Conner Peirson). The Mission would last two years with strict rules such as the fact that they shouldn’t be apart unless they were in the bathroom. 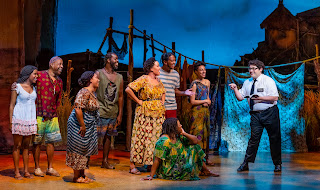 (An aside here: It is suggested that there is a curfew of 9pm, and lights out by 10pm, however when the show finished at about 10pm there were two actual Mormons giving out information outside as we left!) 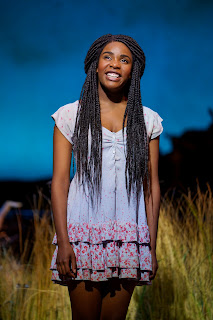 The lads get robbed on arrival before a village leader Mafala (Ewen Cummins) appears to take them to their living quarters. It is quickly apparent that the two Americans suffer from the culture shock immediately. The need to adapt is further enhanced when they meet the other villages and are introduced to the local saying “Hasa Diga Eebowai.” 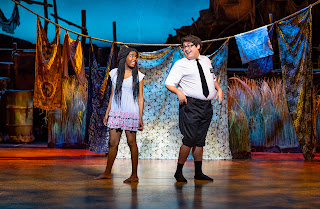 Price makes it clear that he is still hoping to be transferred to his dream location (Orlando). Meanwhile Cunningham wants to finally experience success and, with the help of the Mafala’s daughter Nabulungi (Aviva Tulley) he starts a study group. The big issue with Cunningham is that he has a big imagination and is known to over elaborate on the truth rather than stick to the text and his training. Still the musical wouldn’t be half as funny if he had!

The show has a big cast and a number of memorable songs, which has not always been the case with newer musicals. There is often a lot going on from the opening Hello sequence through to the nightmare sequence.  The set cleverly copes with the changes in scene and the lighting picks out the action.

It is clear that the creative team have a lot of love for musicals and the show follows a fairly traditional format even if the subject matter is not so traditional. Parker and Stone used their South Park movie to make a big statement about racism in the States. Whilst this show addresses racism within religion, poverty, AIDS and female genital mutilation, it does so with much less preaching than the movie and potentially misses a trick. The resultant show, which had the Theatre Royal audience regularly laughing, could end up getting cancelled at some point in the future due to its handling of some issues. Perhaps, like TV sit-coms such as On The Buses, this show may date rather quickly as attitudes change. 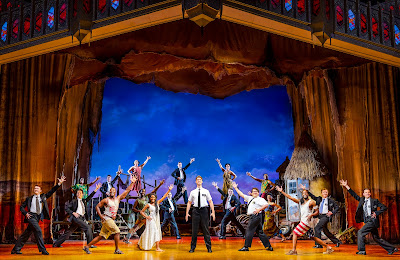 The cast is fantastic. As an ensemble, they create a lively well-paced show that gets its comic timing right every time.

Special mention goes to two of the story's linchpins:  Conner Peirson and Aviva Tulley have a lot of stage time in this show. As Elder Cunningham, Peirson presents a lovable character that has the audience rooting for him as he struggles against the odds. Tulley’s Nabulungi is often the glue that carefully keeps the on stage chaos in check. Both were superb.

The supporting cast, including Robert Colvin and Ewen Cummins, help raise the show and make this a very memorable night out for the audience.

So, yes I really enjoyed it. Is it for everyone? No it isn’t. But, as I often say, it would be a dull world if we all liked the same things.