“All it takes is one experiment to turn the universe on its head.” Asking the question, ‘can you do time travel with a toaster?’, Supernova is a moving and funny new play about love, grief and Physics. 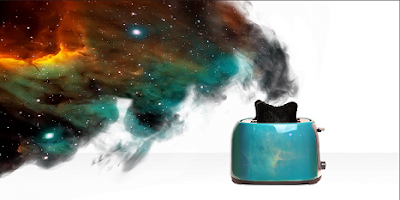 There’s no scientific reason why time moves forwards. And, after her Dad’s funeral, Lucy is determined to prove that it doesn’t have to.

Dragging her partner Phil into her experiment, Lucy tries rewriting the rules of the universe from her kitchen using Einstein’s theory of relativity…and a lot of burnt toast. But will Lucy and Phil discover the answers she seeks, or simply lose those that they had already?

Asking the question, ‘can you do time travel with a toaster?’, Supernova is a moving and funny new play about love, grief and Physics.

Lizzy Mansfield is a local writer from Newcastle.. Her debut play Supernova is touring the UK this summer, and will be coming to the Durham Assembly Rooms on 11th - 12th July. The play stars Adeola Yemitan (RSC: Much Ado About Nothing) and Emilio Iannucci (The Death of Stalin). It will be directed by Fay Lomas (The Girl Who was Very Good at Lying).

The play is inspired by Lizzy’s background as a physicist, and weaves real science through the story. Alongside the performances, there will be an engagement workshop for local schools on 12th July as well as a short talk from Dr. Francesca Chadha Day about access to university physics.

Lizzy Mansfield’s debut play was a finalist for the Hope Mill Theatre’s ‘Through the Mill’ playwriting competition. Lizzy has a background in comedy in film and TV. She is currently writers’ Assistant on Ted Lasso and was part of BBC Comedy Writer’s Room in 2020-2021. Her short film, An Inorganic Love Story, screened at Cannes Film Festival 2019.