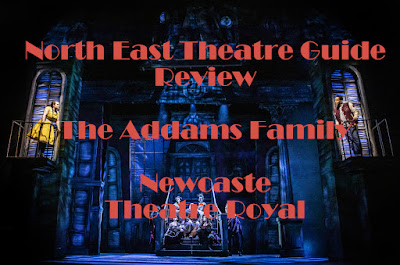 Former Strictly Come Dancing champion Joanne Clifton heads a wonderful cast in a charming musical at the Theatre Royal this week. A nice funny story coupled with well crafted songs makes this a show that is well worth checking out. 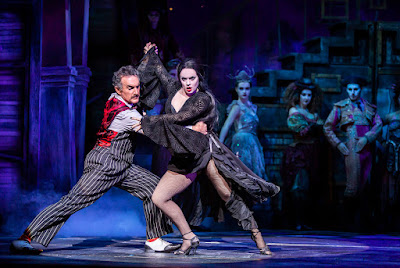 This was the first time that I had seen this particular musical and it hit the sweet spot. Sometimes you see a musical that becomes instantly forgettable but The Addams Family engages the audience well. You find yourself drawn into the family’s life despite their macabre traditions. 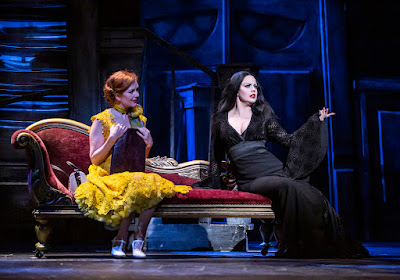 When writers Marshall Brickman and Rick Elice were given an opportunity to create this story it was with the stipulation that they use the original cartoons rather than any subsequent television show or movie.  This means the story that they have come up with is both unique to the musical and yet fits in with the audience’s understanding of the characters. Now a test for the show would be “do you need to be familiar with the family in order to understand what is going on?” and the answer is that there is no need to worry. The prologue and opening song give just enough exposition without leaving the audience drowning in fine detail. 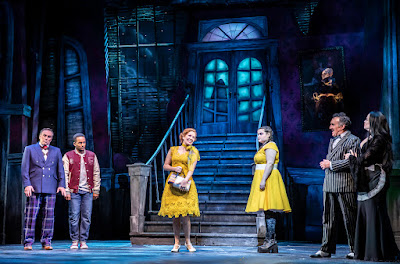 So what is the tale about? In short: Gomez and Morticia Addams (Cameron Blakely and Joanne Clifton) live in New York together with their eldest child Wednesday (Kingsley Morton) and young Pugsley (Grant McIntyre). The show begins with the family welcoming their dead ancestors and Uncle Fester (Scott Paige) announces that they cannot return to their tomb until they help resolve a big issue: Wednesday is in love with a normal lad called Lucas (Ahmed Hamad) and love must prevail. The problem is that Lucas’s parents from Ohio are coming over to meet the Addams Family. Thus the story looks at the build up to the meal and the repercussions afterwards. 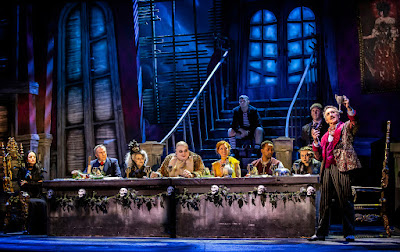 Much of the humour comes from recognising the differences between the two families and, indeed, or our own situations. A nice measure is that, on a handful of occasions, Uncle Fester breaks the fourth wall and this helps with the acceptance of the bizarre scenario. 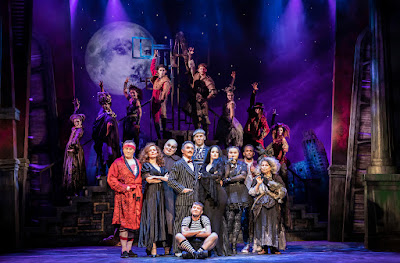 It helps that the cast can sing and dance and the audience are in for a number of treats. Cameron Blakely has a number of songs and he is able to skillfully deliver the lyrics and make the audience feel a part of it. Joanne Clifton has that confident swagger that you want from Morticia. The children also fit in with how you’d imagine them. You can see that, attitude wise, Kingsley Morton’s Wednesday is turning into her Mother. Though she has fallen in love, she has a sense of independence about her. 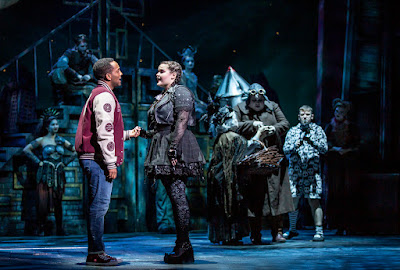 A mention has to go to Dickon Gough as Lurch. The tall slow moving family servant may not have much to say but he is able to convey his feelings in other ways too. It cannot be easy making your entrance down those stairs with those shoes on! 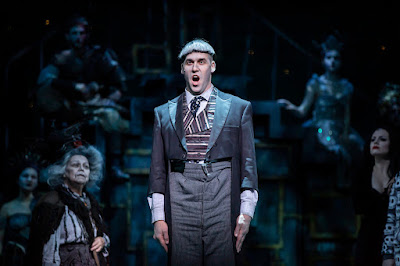 There is wonderful choreography too. Much of this is delivered by the ancestors in their fabulous costumes. This tight group of eight performers often get involved in the action and help with the look of the show. The set, designed by Diego Pitarch looks just right. It helps to set up the atmosphere. It has to be said that the costumes for the entire cast help set the ambience of the tale. 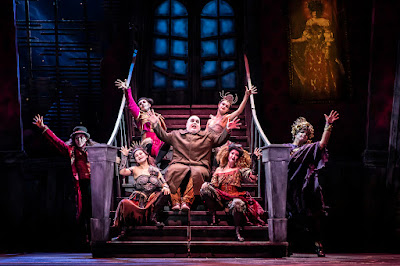 So the show looks the part, is well acted, has an interesting story and has well crafted songs. The cherry on the cake is the live band, under Musical Director Bob Broad, that helps to make the show feel vibrant. At with members, this is one of the larger touring musical bands and the quality of the musicianship permeates through. 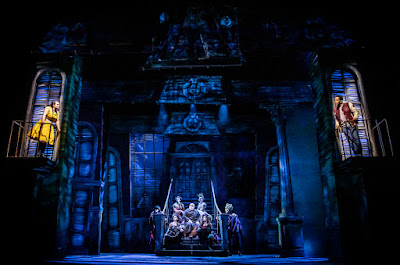 Are you waiting for the “but”, dear reader? It isn’t coming. I know. Isn’t that shocking?

You see I love seeing new musicals but they do tend to fall into 2 categories: shows that are almost immediately forgettable and those for which I must add the cast recording to the collection. The Addams Family falls into the latter group. I cannot fault what was a wonderful night at the theatre. Even my usual grumble about sound was not a problem as the dialogue and singing were both clear and at a nice volume.

The Addams Family is one of my favourite musical shows since we came out of the last lockdown. I’m pleased that I finally got to see it. 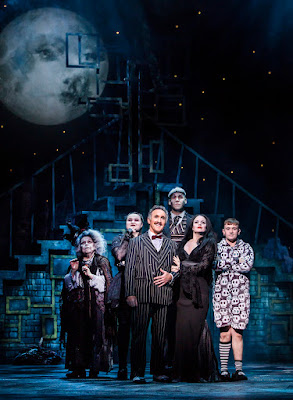