Birmingham Royal Ballet’s Director Carlos Acosta promises entertainment for all ages when he brings an explosion of Spanish sunshine, spectacular dance and vivacious comedy to Sunderland Empire in spring 2022.

In a new production created especially for Birmingham Royal Ballet and featuring all-new designs by Tim Hatley, Don Quixote introduces us to Cervantes’ famous knight himself, lovers Kitri and Basilio, and a host of supporting characters. As the Don sets out on a quest to track down his true love, with his loyal friend and servant Sancho Panza at his side, he finds himself embroiled in an unlikely adventure of love and dreams.

The first UK performances of Acosta’s sparkling new 21st-century production of this 19th-century masterpiece, featuring music by one of the founding fathers of Russian Ballet music Ludwig Minkus, performed live by the Royal Ballet Sinfonia, comes to the Sunderland Empire from 10-12 March 2022. 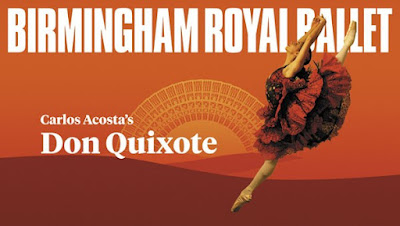 Carlos Acosta's original production, his first full length ballet, was created for The Royal Ballet in 2013, and was last seen at the Royal Ballet in 2019. It has also been seen in cinemas all over the world. Carlos has been performing in Don Quixote since the age of 16 when he won the Prix de Lausanne so it’s very close to his heart but also a real crowd pleaser. As well as wanting to ensure this new version is suitable for touring, Acosta said:

“For this new production, I wanted to give it a completely new take and a new look to the one that I gave to the Royal Ballet so that Birmingham has its own. It’s a new production with new concept and designs, re-orchestration, new elements of the choreography, new colours, a whole new palette.

““This ballet is really popular with dancers,” he says. “It is a ballet for virtuosos. If you really have aspirations to become the best ballet dancer you can be, then you must have this ballet under your belt. Also, it’s a production which gives opportunities to a large ballet company because there are a lot of roles for everyone in the company - for soloists, for corps members and principals so it’s a real showcase.”

Birmingham Royal Ballet standardly performs at Birmingham Hippodrome for approximately ten weeks of the year and the remainder of the year tours throughout the United Kingdom and overseas. On average, the Company performs 175 shows a year nationally and internationally.

Tickets are available from the theatre box office and online from our affiliate ATG Tickets: https://prf.hn/l/75DpRVx