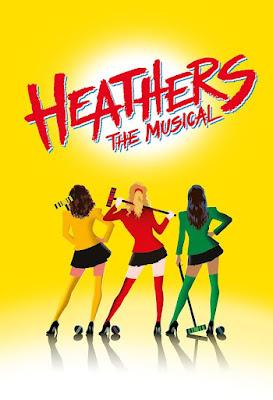 Heathers finally makes it to the North East this week after a successful run in the West End. Based upon the 1989 movie, it is a black comedy about surviving High School. 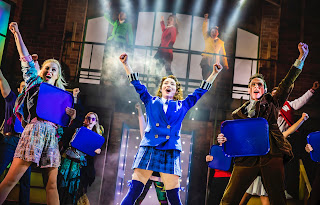 The show opens with 17 year old Veronica Sawyer (Rebecca Wickes) taking the audience with an introduction to the various tribes and cliques that form in school by the student’s mid-teens. This includes members of the football team, Kurt (Liam Doyle) and Ram (Rory Phelan), as well as her friend from her Kindergarten days Martha (Mhairi Angus). In alpha position are three girls called Heather whose personalities follow certain personality traits: so we are presented with weak-willed Heather McNamara (Lizzy Parker), petty Heather Duke (Merryl Ansah), and the leader of the pack Heather Chandler (Maddison Firth). 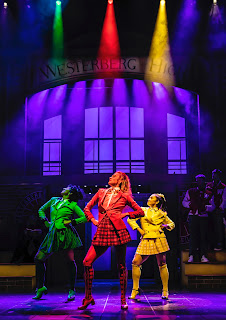 Initially an outsider, Veronica is invited to join the Heathers - along with a makeover - after she gets them off detention by forging a hall pass. Once she joins them she gets noticed by her other classmates but is expected to be cruel to her long term friend Martha. Veronica's head is turned when new lad Jason 'J.D.' Duke (Simon Gordon) appears and puts both Kurt and Ram physically in their place. 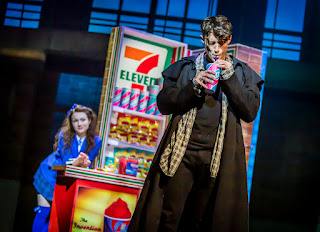 Whilst the story initially goes over familiar teen movie territory - with a party after school - it soon takes a number of darker turns as J.D.'s relationship with Veronica develops.

This is very much a dark comedy with book, music and lyrics from Laurence O'Keefe and Kevin Murphy. There are some big ensemble numbers, a number of duets between Veronica and J.D. that Rebecca Wickes and Simon Gordon handle well ,plus some solo spots. The lyrics work well with the plot and help push the emotions of the characters across, which is a good job given the nature of some of the subject matter.

It is worth flagging up a trigger warning at this point as the show covers a number of dark issues, including bulimia, bullying, teen suicide, sexual assault, homophobia and school violence. The way in which you might handle such issues is different today compared to the 1980s. As a result the story gets caught at times dealing with a number of serious issues in a trivial/lighthearted way which may cause issues for some. For others, there are a number of serious talking points to consider after the show. In balance my companion and I feel the show managed to handle the difficult stuff right by the end. 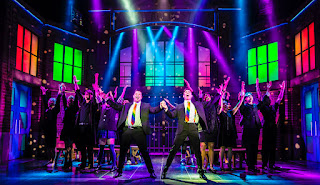 There were some great solo spots, in particular for me, Lizzy Parker really shines during Lifeboat. Mhairi Angus also got the audience on side during Kindergarten Boyfriend.

Liam Doyle and Rory Phelan worked well as the comedy duo. Their timing added a number of laughs to the action. In fact the show breaks the forth wall occasionally - even to the extent of calling out one member of the audience.

The set design (David Shields) helped keep the action flowing and it was noticeable that the clever lighting design (Ben Cracknell) not only highlighted the action but was happy to colour code the Heathers. It was wonderful to hear a live band, under musical director Phil Cornwell, for the first time this year. All other shows that we've seen so far have used pre-recorded music. Dan Samson's sound design ensured that we could hear everything at the back of the venue - and as regular readers will note - that was not always the case in some of those 2019/2020 shows we reviewed just before lockdown. 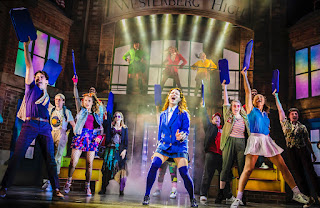 The show went down well with the audience - the stalls were up on the feet applauding at the end. It is a entertaining musical that does more than the average teen movie. My companion even went as far to say that they preferred it to the movie. For those of you wanting to see a new musical that has good execution then this one is a decent adaptation.

Potentially, given the subject matter, this could have been really bad, but they missed the bullet and created an entertaining night at the theatre.

Heathers the Musical plays at Newcastle Theatre Royal from Tuesday 7 – Saturday 11 September 2021. Tickets are priced from £15.00 and can be purchased at www.theatreroyal.co.uk or from the Theatre Royal Box Office on 08448 11 21 21 (calls cost 7ppm plus your phone company’s access charge).