Preview performance on Wednesday 20 October at The Exchange in North Shields.

Touring the North East of England from Thursday 21 October to Saturday 13 November 2021. 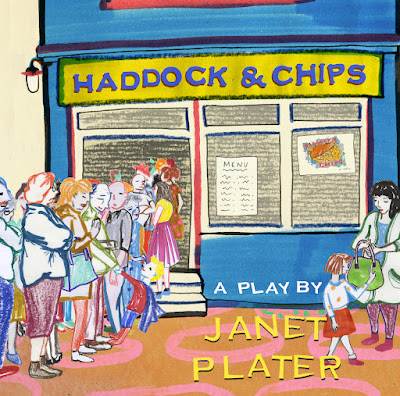 Newcastle based CaroleW Productions is delighted to announce the North East tour of Haddock & Chips a funny, heartwarming and timely new play by Janet Plater. Starring Phillippa Wilson and Joe Caffrey and directed by Jake Murray

Haddock & Chips is set on a busy night in Frankie’s, a fictitious chippy in Whitley Bay. When reports start coming in of a little girl gone missing the community must pull together to find her before it’s too late.

The play, which will preview at The Exchange in North Shields on Wednesday 20 October before opening at Gosforth Civic Theatre on Thursday 21 October 2021, will then tour to Alnwick Playhouse, Queen’s Hall Arts Centre in Hexham, Gala Durham, Frosterley Village Hall in Bishop Auckland, Middleton and Todridge Village Hall in Morpeth, The Witham in Barnard Castle, Arts Centre Washington, The Maltings in Berwick-upon-Tweed, Kentmere Institute in Kendal, Wetheral Community Village Hall in Carlisle, Ushaw Historic House, Chapels and Gardens near Durham and Saltburn Community Theatre before returning to The Exchange in North Shields on Thursday 11 November 2021 for four homecoming performances.

Phillippa Wilson and Joe Caffrey, who last worked together in Twelve Tales of Tyneside at Newcastle’s Live Theatre, will play all of the characters to come through Frankie’s doors providing a whistle stop encounter with Whitley Bay’s finest folk and an uplifting message about the power of ordinary people working together to care for one another.

As producer Carole Wears of CaroleW Productions explains: “Brimming with humour and humanity Haddock & Chips promises to capture the hearts and minds of audiences transporting them to the coastal town of Whitley Bay for a night of feel good entertainment. Stopping off at fourteen venues across the North East of England, with a few Cumbria dates mixed in for good measure, Haddock & Chips is a play about the people and communities that can be found in any seaside resort. You’ll almost be able to smell the sea air!”

Director Jake Murray added: “Haddock & Chips is a beautiful, funny, thought-provoking new play which is both moving and inspiring. Set in the North East the play has a big heart, a shrewd eye for human character and a real community spirit. Janet Plater has carefully crafted characters we know but don’t always see on stage in a play that explores the idea that people don’t always achieve what once they dreamt of. Some are lucky to find contentment, even if it’s in unexpected ways and others drift, searching for a sense of belonging and home.”

Originally from Fenham in Newcastle upon Tyne Lee spent four years in the original London Cast of Billy Elliot the Musical where he became the show’s Resident Choreographer before going on to work on a host of blockbuster shows across the world.

As if that’s not enough, some lucky audience members will be gifted a limited edition Haddock & Chips salted chocolate created especially for the tour by Bev Stephenson of Gosforth based North Chocolates. Theatregoers will also be explore a unique foyer artwork created by Newcastle based visual artist Michael Davies based on the themes of the play.

* These dates are part of the Highlights Rural Touring Scheme

Haddock & Chips, which will tour the North East of England from Wednesday 20 October to Saturday 13 November 2021, has been made possible using public funding by Arts Council England.

Tickets for the tour range from £12-£14. For more details about tour dates and to book tickets visit www.carolewproductions.com.