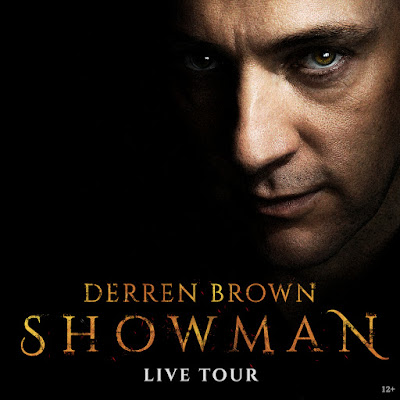 It has been 6 years since Derren Brown toured. With his reputation for live performances being something spectacular which ensured that the Sunderland audience were anticipating to witness a special event on the first night of his week long run.

This was our first time at his live show. We’ve enjoyed seeing him on TV as he uses, as Wikipedia points out, "magic, suggestion, psychology, misdirection, and showmanship" to entertain. Indeed we have seen him expose mediums and faith healers as fakes. Yet, very little details were made available before this show.

Regular readers will also be aware that the North East Theatre Guide is not in the business of writing spoilers. We don’t plan to start giving away any surprises with this report either.

Here's the thing, I want to say how the show starts but I don't want to spoil it for you. So I am not going to.

So what can you be told? As you enter the Sunderland Empire you are greeted with many old posters celebrating the venues origins as a fabulous place for variety theatre. It used to show entertainers that would amaze and excite the audience rather than modern drama theatre. You get a sense of the desire to recapture those days with the set design too. An Edwardian, almost steampunk style naturally fits in in a venue that opened in 1907.

Then you get to the performer himself. Derren has created a new show that does not feel like any of his previous shows (based upon what we have seen on DVD). He is a naturally engaging performer than the audience are willing to interact and empathise with. He is a storyteller who can keep 1200 people hanging onto what he says and does. The audience laughs, they cheer and, crucially, they follow instructions.

In 2 hours 30 minutes, including interval, Derren Brown sends you on a journey and at the end of it you'll want to discuss it with whoever you came with. It literally sounded like everyone was asking "how" as they left, such is the sense of individual participation in the collective show. It is a really good night out.

It is worth adding that no one was asked to do anything that they didn't want to. He is able to work entirely with volunteers.

This is a really well worked and entertaining show that is different to the other shows that the Empire will host this year. It has been a long 19 months for us to come back to this place and it marvelous that we did so to such a great show. If you want to find out more, I do recommend that you book tickets and find out for yourself.