in partnership with CaroleW Productions 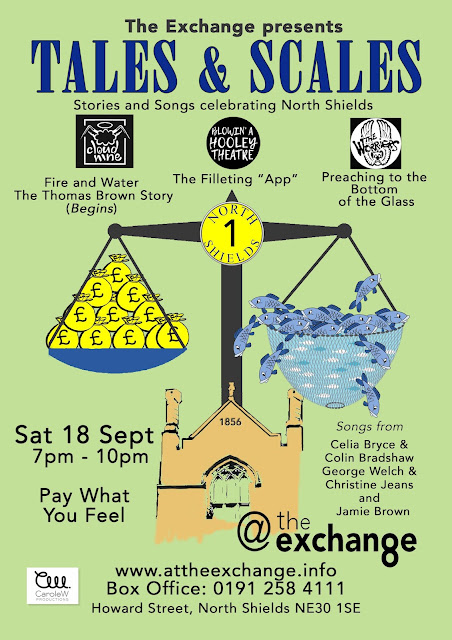 This is the first of three such evenings of theatre and music leading up to a community play in early summer 2023 for which writer Steve Byron will be seeking out stories of those who have lived and worked and passed through the commercial centre of North Shields.  The shows are part of the North Shields Heritage Action Zone project which will culminate in a piece of musical theatre to celebrate its past, present and future.

For this launch event, music will be provided by Celia Bryce and Colin Bradshaw, George Welch and Christine Jeans & Jamie Brown.

The three short plays on offer will be by Cloud Nine Theatre, Blowin’ a Hooley and The Worriers, details of which are below.

Presented by Blowin’ a Hooley

A loving answer to Tom Hadaway’s classic ‘The Filleting Machine’ first written almost 50 years ago. The play finds the same family living and working in North Shields today and asks what, if, anything has changed for ‘Ma’ and ‘Da’ in the intervening years.

Preaching to the Bottom of the Glass

Presented by The Worriers

Onto streets soaked in beer and bounty from the sea comes a saviour, following in the footsteps of Wesley, to save the folk of Shields with no wish to be saved.

If you have your own reminiscences or stories to tell don’t hesitate to contact the team at tales@theexchange.live