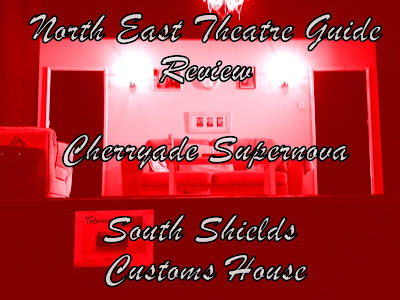 The Best Show We Have Seen This Year! 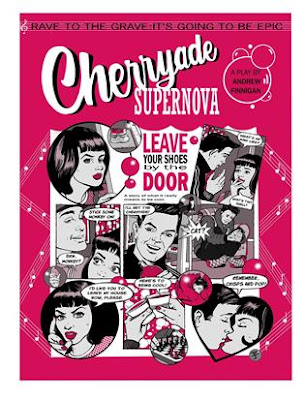 As part of the Custom’s House Takeover Festival, Cherryade Supernova is a well crafted debut from a promising new playwright delivered by a talented young cast that we hope to see more off in the future.

Okay. The best show of the year so far? I know – it may be June but it is 448 days since I had the chance to sit in a theatre and enjoy a show with other people. To hear people laugh openly in a way that just doesn’t happen on Zoom  was wonderful. To hear them react to the story as it unfolded was blissful. Indeed, to see an actor improvise seamlessly when it didn’t quite go to plan, unless he expected to consume some of the silver wrapper with his mint/gum, was a rare pleasure. This first post-lockdown show was always going to be something special – fortunately it was also worth seeing in its own right. I hope no one stays away because of the you-know-what situation. I felt perfectly safe in my socially distanced seat and enjoyed the luxury of drinks being served before the show to my seat. The only grumble, and it is a teeny-weeny one, is that my regular coffee wasn’t available so I had to settle for a Coke.

Hang on… I need to start reviewing this show. I know.

The story is quite an ambitious one to deliver for the writer Andrew Finnigan as it features a large cast of eight. Yet, in this impressive debut, he manages it. His relative youth working in his favour as each character spoke with an authentic voice. This was not a play written by some middle aged person trying to create / understand how kids speak. The scenario is universal and timeless, even Shakespeare would recognize it, but the delivery was crisp and contemporary. As it started I felt it was potentially a companion piece to Abigail’s Party – i.e: what was happening next door. 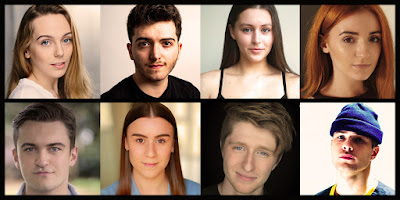 So clearly Josie (Chloe Jane Millar) and Josh (Benjamin Michael Smith) have enjoyed an academically successful but socially awkward start to their lives. Josie’s mother suggests that they hold a house party for their friends, though she doesn’t think anyone will turn up. With quiche, cherryade and leftover Shloer in the fridge and the possibility of fish fingers as a snack later on, they await their first guest after Josie has cleaned the house. Josh has invited a lot of people he is in touch with on social media for the “rave to the grave – it’s going to be epic”. First arrival is Callum (Kieron Michael), armed with a bag of satsumas and a phone full of Monkey tunes. He may have had a tough time at school but he plans to stay tee-total.

In quick succession Reece (Jack Breedon) arrives at the same time as Lily ((Becky Lindsay), who Josh fancies and Stevie (Emma Corless) who is full of the self-entitlement that comes with assuming that you’re alpha in a group. The girls arrive with wine but expected more booze to be available.  Completing the party are Sophie (Lucy Marie Curry) and Jae (Jackson Watson) who are no longer getting along. Sophie has just flung Jae’s wallet out of the Metro window and so he lacks the funds to get any alcohol.

There is a mismatch between the hosts, who expect everyone to take their shoes off upon arrival and most of the guests who feel drink is the answer to a party’s problems. Some of the guests go with the flow better than others and this is the source of both tension and a number of laughs.

This is definitely a comedy that doesn’t fall down the rabbit hole of farce.

Director Abigail Lawson has created a show that flows through the action in just over an hour. There is an authentic feel to the casts delivery most of the time. This helps the comedy that Kieron Michael delivers as the charva, who is in his unique space and dimension compared to the other guests in the show, work well. He has great timing plus he was able to develop empathy for his character. The cast work well as an ensemble and as credible individuals.  For a group who are so early on in their careers it was delightful to watch them come across as their characters rather than as actors pretending to be these various personalities. That in turn also helped the delivery both of the lighter moments in the tale and the darker brushes with bullying.

The show was a pay what you feel performance. So after paying the £2.50 per group booking fee, it is up to the individual to choose how much to pay at the end by putting it in the bucket. This is a great idea as it makes theatre accessible to all. One suggestion for the future is to include a card reader as a part of the options as not everyone carries cash these days.

If there is any justice then, just like opening night, this show will have the “house full” sign up again tomorrow (Sunday) night for the last show. It is a modern and authentic comedy delivered by a tight cast that I hope to see again soon. The writer too is one to watch. I couldn’t have wished for a better start to theatre in 2021.