• Free Neighbourhood events across the North East throughout June

As it prepares to reopen for the first time since March 2020, Northern Stage plans to reunite audiences and artists through a bold, inclusive programme that celebrates connection and community. Free events in local neighbourhoods across the North East throughout June will be followed by two new pop-up venues in July and August, before reopening the theatre from 25 August with a Housewarming programme that opens with a new Unfolding Theatre show co-created with children, and includes the first production Artistic Director Natalie Ibu will direct for Northern Stage.

Having started as Northern Stage Artistic Director and Joint Chief Executive in the middle of the pandemic, in January 2021 Natalie Ibu pledged to bring audiences stories no matter what, meeting them wherever they were, and at every step of the recovery roadmap. Following the success of Northern Stage’s first ever digital programme, Can We Come In, and building on a commitment to working with freelancers and the independent sector in Out on the Toon, Housewarming is Natalie Ibu’s debut season in the building. Audiences and artists will be welcomed back into the theatre with a programme that reflects diverse stories and communities. Housewarming celebrates local freelance artists, independent companies and Northern Stage’s own team coming together to make work in the North East, about the North East, with North East artists, for North East audiences, with productions that reach beyond the ordinary, and where nobody is left behind.

Natalie says, “The pandemic has affected us all in different ways but the one thing that cuts across all our experiences is the sense of isolation and disconnection. To me, theatre is about stories that help us make sense of ourselves, each other and the world. Theatre can help us to process trauma, collectively, so live theatre is essential as we make our way into recovery. Our job is to stand with our community and make space for that to happen, which is why we can’t wait to meet audiences and artists in their local neighbourhoods this summer before welcoming everyone back to ours with a Housewarming programme where all are welcome. I have been met with such warmth in the region and I’m thrilled to be able to return the favour, throwing a season long party with some incredible local female artists breathing life back into our auditoria.”

Shows include Free School Meals (25-28 Aug) - a Northern Stage co-production with Unfolding Theatre, co-created with children; the return of the Young‘uns’ critically acclaimed tale of a working class hero, The Ballad of Johnny Longstaff (7-18 Sept); a new production of Jim Cartwright’s Road (8-30 Oct) in its 35th year, directed by Natalie Ibu; a new adaptation of magical family favourite The Sorcerer’s Apprentice (27 Nov - 31 Dec), written by Laura Lindow and directed by Maria Crocker; plus new work from homegrown theatre makers who are Northern Stage Associates, BEYOND and NORTH supported artists.

On directing her first Northern Stage show, Artistic Director Natalie Ibu says, “Road is so perfectly fitted to the spirit of our Housewarming season and is the perfect post-pandemic celebration of community and resilience - the narrator introduces us to residents on the road, who then make their way out of their own houses to their local pub. It’s the dream play for me to direct as my first show for Northern Stage - I directed a scene when I was at university and it has really stayed with me for 17 years. It’s with Road that I found my vision as a director. It helped me articulate that I wanted to tell stories about the blood, sweat and tears it takes to live life, and that I wanted to fill stages with loud, vivid expressions of what it means to be alive. Originally set in Lancashire, we’re relocating it to a small town in the North East - a working class community dealing with poverty, unemployment, disappointment and a thirst for change whilst also making the most of who and what they have. It is about what it is to live, in all of its complexities. There’s an incredible resilience in this community, a charm; they’re a hoot to be around.” The creative team includes Designer Amelia Jane Hankin, Lighting Designer Zoe Spurr and Movement Director Nadia Iftkhar; casting will be announced in early September. 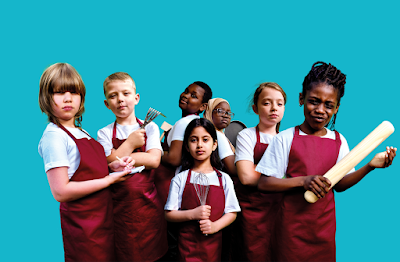 Unfolding Theatre Artistic Director Annie Rigby will direct Free School Meals in a co-production with Northern Stage. Annie says, “We’re so proud to be co-producing the show that will welcome audiences back to Northern Stage. Bringing people together is what Unfolding Theatre is all about. It's especially exciting to be reopening the theatre with a show made with children. Free School Meals puts children in charge. Audiences will be welcomed into a restaurant run by children - taking them on a journey that reflects on power, inequality and hope for change.” Free School Meals will be written by Luca Rutherford, with music by rapper Kay Greyson.

Before reopening the building, Northern Stage is inviting people to get Out on the Toon, starting with free outdoor events to reconnect artists and audiences in their local neighbourhoods throughout June. In July,

Northern Stage and English Touring Theatre present Trailer Story - designed by Jon Bausor and Tina Torbey, this pop-up venue in Newcastle city centre will offer audiences a free taster of the kinds of shows they can expect to see at Northern Stage. Whilst the programme is still to be announced, ETT’s Artistic Director Richard Twyman and Executive Producer Sophie Scull explain, “We want to provide a safe and joyful space to come together and celebrate the return of live arts, and the immense diversity and talent of our country's artists. We hope to make Trailer Story a platform for national and local theatre-makers, performance artists and musicians to share their work with audiences outdoors - empowering communities and celebrating imagination.”

Then from 12-15 August, Paines Plough’s Roundabout comes to Byker as part of Northern Stage’s ongoing work with the local community. Opening with Welcome to Byker - a live version of Northern Stage Young Company’s Byker Audio Stories inspired by people living on the Byker Wall estate, the programme will also include Roundabout’s first ever musical, Black Love by Chinonyerem Odimba; Really Big and Really Loud by award-winning family playwright Phoebe Eclair-Powell; Hungry - a new play about food, love, class and grief by Chris Bush; Drag Me to Love by North East drag cabaret trio Bonnie & the Bonnettes; a rehearsed reading of Curious Monkey's HERE by Lindsay Rodden - set in Byker, it’s about finding sanctuary in the unlikeliest of places and was originally due to open at Northern Stage in March 2020; What’s In the Box? - a make up your own adventure show for families from improv company The Suggestibles; and Byker Best Summer Ever – a free summer activity programme developed with and for young people. Free tickets for all Roundabout shows will be available for local residents via community partners.

Earlier this year, Northern Stage worked with Vici Wreford-Sinnott from disabled-led theatre company Little Cog to make its programme as accessible as possible, including captions, audio description, BSL at live events, content warnings and relaxed approaches to the programme and time frames for workshops. As well as continuing to make its work more accessible, Northern Stage understands that coming to see a show in person isn’t always possible, so will continue to offer digital access to its shows. Northern Stage at Home will mean that people can watch Northern Stage productions at a time or place that better suits them. There will also be a number of socially distanced performances across the season for audiences who would prefer some space, even if social distancing is no longer legally required.

Alongside work on stage, the participation offer will include an extension of Northern Stage’s UK Theatre award-winning work experience programme introducing young people to non-acting careers in theatre, virtual tours made with and by young people aimed at both primary and secondary schools, Young Company attending the European Youth Theatre Festival in July, and the launch of Cultural Encounters - a yearlong programme to develop a community programmers group in Byker, where Northern Stage has continued to work with the local community throughout the pandemic.


And the team at Northern Stage is continuing to hold conversations with artists to build on its talent development programme, including So Good to Zoom You (Artistic Director Natalie Ibu Zooms a different artist every day in 2021 to try and make up for the ways 2020 kept people apart), Round Tables and Open Auditions, following on from hosting a region-wide Devoted & Disgruntled event to discuss the future of talent development in the North East in February 2021.

Tickets for shows start from £10 and go on general sale from 1 July, with pre-sale tickets available to Northern Stage members and supporters from 24 June. For more details and full listings visit www.northernstage.co.uk