Live Theatre bring back their successful show Clear White Light which played to sell out crowds last year. With just a single change in the cast, the show gets another chance to shine at the Quayside venue. 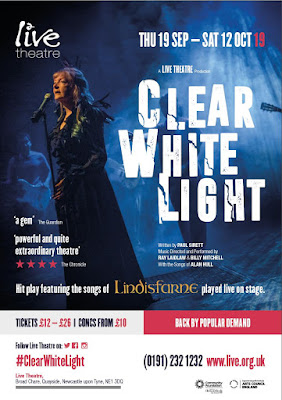 New cast member Elizabeth Carter appears as Ali, the student nurse who appears at St Nicholas Hospital for her first shift on the all male mental health ward. She is met by Rod (Joe Caffrey) who will be running the shift single-handedly as the others have not turned up and Ali doesn’t count as she is not yet qualified. After a quick briefing Ali is introduced to bright Maths University student Charlie (Dale Jewitt) who has had a breakdown, former garage owner Barry (Billy Mitchell) and struggling Aaron (Phil Adele). She is asked to look after these patients in order to give Rod a hand. Rod also has his sister Maddie (Charlie Hardwick) staying at the hospital and fellow nurse Jo (Alice Blundell) keeps popping across from Maddie’s ward with progress reports.

So Clear White Light is a musical that explores some of the crazy events that can occur overnight in a hospital ward. It features the music of local band Lindisfarne - the connection being that their former band mate and song writer Alan Hull worked at St Nicks himself and would write these songs whilst working the night shift. On stage are Billy Mitchell as one of the cast as well as the guitarist, whilst Ray Laidlaw fills the room with the sound of his drumming.

The songs are sung by Charlie Hardwick who gives a really passionate performance as she breathes new life into these classic songs.  The rest of the cast help out with the other instrumentation, as well as backing vocals. Live Theatre may not be known as a musical theatre venue but it is fabulous to see them both supporting new writing with a musical based on local themes. That said, this doesn’t feel like a standard jukebox musical - perhaps it is the higher level of empathy with that source material.

The show also has really strong performances from Joe Caffrey, Elizabeth Carter and the patients. Joe does not come across as acting as he offers advice to the novice nurse. He plays the father figure with consummate ease. Likewise Elizabeth takes the lead as the narrator and young nurse who isn’t totally naive with the trouble that initially confronts her. This must be the first show we’ve seen her in in which she doesn’t handle a large amount of the singing duties, but she shows her versatility as a ‘straight’ actor.

Paul Sirett’s script has plenty of twist and turns, coupled with humour, to keep the show interesting.  The show features some great lighting that is able to pick out action at the fringes of the set as well as arrivals in the lift.

This was Joe Douglas’s directorial debut at Live last year and he has created a lively well paced show that has enough tension, pathos and fun to lift the show. 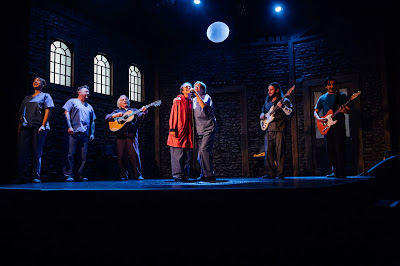 If I was to compare the show with last year then I’d say I appreciated being sat further away from the loud drums so I was able to appreciate the wonderful singing. It made a real difference to me and I was in a much happier mood when we got to the final scenes. Live Theatre is one of those intimate venues in which the last row upstairs still leaves you close to the action.

Clear White Light is a great musical that puts both the North East and mental health care in a positive light. It reflects the dedication of both dedicated healthcare professionals and the cast & creatives representing them. Indeed, it is a canny little show.

Tickets:
Clear White Light is at Live Theatre from Thursday 19 September to Saturday 12 October.  For more information or to book tickets which are between £12 and £26, and concessions from £10 call Live Theatre’s Box Office on (0191) 232 1232 or see www.live.org.uk.