Preview: I Have Met the Enemy (and the enemy is us) at Byker Community Centre

What if we said that Britain (this tiny island) is the second biggest arms dealer in the world?

Common Wealth and Northern Stage present:
I Have Met the Enemy (and the enemy is us)
Byker Community Centre, Newcastle
Wednesday 16 - Saturday 26 October 2019

Amnesty International Freedom of Expression award-winning company Common Wealth takes on the UK arms trade as the topic under scrutiny in its latest site-specific production. Delivered by a former British soldier, a Palestinian citizen and a Yemeni artist, I Have Met the Enemy (and the enemy is us) examines the personal perspectives of two people with lived experience of war, against the backdrop of global politics; asking audiences to take a close look at the UK defence industry and the role we play, as both a nation and as individuals, in wars that are seemingly far away. 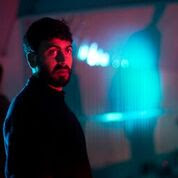 Alexander Eley, a former British soldier, and Mo’min Swaitat, a Palestinian citizen, meet in an intimate and powerful exchange, in a joint attempt to understand the UK arms trade and its    impact around the world. Through differing perspectives and a shared love of techno (both are techno DJs - an unlikely common ground discovered early in the rehearsal process), they take us on a personal and political journey into the darkest corners of what makes Britain tick. Sharing a stage with 72 electronic metronomes (representing the 72 Eurofighter Typhoon jets sold to Saudi Arabia this year by the UK) and a community cast in Byker, Common Wealth will transform these spaces into worlds for audiences to explore freely - a world charged with light, sound and robotic installation. Audiences will be allowed agency and decision-making about when they want to participate, intervene, or simply observe - but they are always complicit in the action.

The performers will guide audiences through the complex landscape of the arms trade, at times taking on the role of arms dealers, politicians and action heroes; at other times being completely themselves, sharing stories, thoughts and feelings based on their own lived experiences - including the discovery of their shared love of techno music, which acts as a coping mechanism and form of release for them both.

In collaboration with Yemen-based Comra Films, I Have Met the Enemy will feature a third  character, Shatha Altowai, a Yemeni painter whose artwork and materials were lost when her neighbour's house was hit by an air strike. Shatha will join Alex and Mo'min on stage through video footage filmed in Yemen to share her own experiences with the audience, highlighting the impact of British arms used by Saudi Arabia in Yemen today. Britain’s role arming Saudi Arabia in the ongoing war in Yemen is the focus of many national and international campaigns, and earlier this year the Court of Appeal declared the UK government’s licensing of these arms sales unlawful. As Common Wealth start rehearsals for I Have Met the Enemy, DSEI, the biggest arms fair in the world, exhibits in London to over 35,000 attendees, from 50+ countries around the world.

A co-production with Northern Stage, the show will have its world premiere at Byker Community Centre, Newcastle; building on a long term partnership between the city-centre theatre and the local community of Byker. Common Wealth will work with a community cast of seven local people who will add another layer to the show by offering their own experiences and understanding of the arms trade. They will play an important role in helping the audience to understand how the arms trade affects people living in the UK. The local cast will share their personal experiences and help to build the world that transforms Byker Community Centre.

Ahead of its Byker premiere, I Have Met the Enemy will preview at TFD Youth Centre in Holmewood, Bradford - an area, like many others that are socially and economically deprived, whose demographic is typically targeted by the British Army, according to a briefing document for the army’s ‘This Is Belonging’ campaign.

Evie Manning and Rhiannon White, Co-Artistic Directors of Common Wealth said “We have been inspired by friends and family members who have experienced war directly, hearing firsthand accounts of what it means to live through conflict. The show will be told by two performers who have lived experience of war – a former British Solider and a Palestinian Citizen. I Have Met the Enemy is an attempt to understand someone who has been positioned as your enemy.

The production will give a personal perspective on the experience of war; encouraging us to understand how the UK’s sales of military arms affects people and nations. Our hope is for us all to understand how close war is to us, be it through those we know or by the knowledge that weapons are made just down the road from us. The show will be a very visceral experience, it will encourage audiences to confront themselves and the wider world and imagine something new.”

I Have Met the Enemy (and the enemy is us) is co-directed by Evie Manning and Rhiannon White, and devised by Common Wealth in collaboration with writer Hassan Mahamdallie (playwright and campaigning journalist for race equality) and performers, Alex Eley and Mo’min Swaitat. Robbie Thompson (award winning Glasgow-based visual artist) will create a kinetic, sonic and visual environment that will underscore, disrupt and punctuate the world, with lighting design by Andy Purves (Hang, Sheffield Crucible; Radical Acts, Common Wealth).

I Have Met the Enemy (and the enemy is us) is a Common Wealth and Northern Stage co-production, in association with Chapter and Southbank Centre.

The show previews at TFD Youth Centre, Bradford, from 27 September to 5 October before its world premiere at Byker Community Centre, Newcastle, from 16 to 26 October; with further UK touring dates to be announced for Cardiff, London and Edinburgh in 2020.

Tickets:
I Have Met the Enemy (and the enemy is us) appears on Wednesday 16 - Saturday 26 October 2019. Performance times:  7pm, 6pm on Tuesday 22 and Wednesday 23 October, with matinees on Saturday 19, Wednesday 23 and Saturday 26 October at 2pm
Byker Community Centre, Headlam St, Newcastle upon Tyne, NE6 2DX £10 and £2 for Byker residents Tickets via https://www.northernstage.co.uk/event/i-have-met-the-enemy-and-the-enemy-is-us and on 0191 230 5151
Running Time: Approx. 75 minutes
Suitable for ages 12+