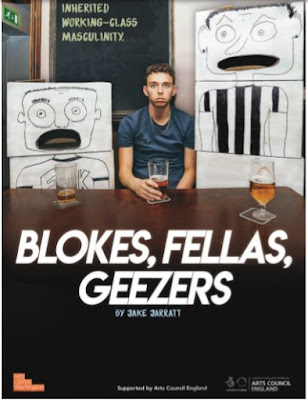 Blokes, Fellas, Geezers is the debut show of Jake Jarratt, a talented emerging theatre maker and performer born and bred in the North of England. Inspired by personal experiences of growing up in a rural Northern town, and dealing with his father’s expectations of what a man should be, Blokes, Fellas, Geezers tackles the concept of inherited working-class masculinity. Combining story telling and comedy to the backdrop of Eye of the Tiger, Blokes, Fellas, Geezers delves into the story of a young man battling a toxic system that doesn’t want to be changed, in order to experience more than the men around him have.  The hour long show is fast paced and laugh out loud funny as we watch Jake jump from one character to the next, bringing us to the heart of Durham in the 1990’s.

Crook, a market town located somewhere between Bishop Auckland and the city of Durham. Often referred to as “The Gateway to the Weardale” by some ponce in a shirt and tie that works in the council offices.
You’ve got Crazy Jakes, where you can buy anything from fag papers and vape juice to crisps, pop, rags, clothes and plant pots. Or you’ve got little coop were you’ll have your eyes ripped out for everything in there.
Few bookies if you want a punt, you’ve got a choice between three of them. Right in the middle of Crook lives Jake and his Fatha. Jake’s Fatha always told him “If someone hits you, hit them back twice as hard.” And then one day Jake asked “Why?”

Jake Jarratt is an emerging theatre maker and performer based in the North East of England. His work explores his experience of being a working-class, Northern lad, and is made for audiences who may or may not have shared the same experience. Jake graduated with a Masters degree in Theatre & Performance from Northumbria University in 2017. He is supported by Northern Stage’s NORTH Company Development Scheme and was a recipient of NEAD funding in 2018. His work has received support from Live Theatre, Northern Stage and Arts Centre Washington.