Preview: Pride and Prejudice* (*sort of) at Newcastle Northern Stage

The Royal Lyceum Theatre Edinburgh along with partners Birmingham Repertory Theatre, Bristol Old Vic, Northern Stage, Nuffield Southampton Theatres, Oxford Playhouse, and new partners Leeds Playhouse, are delighted to announce the cast for the remount of the critically-acclaimed Pride and Prejudice* (*sort of), presented in close collaboration with partners of the original production, Tron Theatre and Blood of the Young.

Having first opened at Tron Theatre to an overwhelming audience response in Summer 2018, the production will tour to UK venues over Autumn 2019 and Spring 2020.

This is an adaptation like no other. Drawing on over two-hundred years of romantic pop history is Blood of the Young’s unique take on a beloved novel - the hugely acclaimed Pride and Prejudice* (*sort of).

Six young women have a story to tell. You might have seen them, emptying the chamber pots and sweeping ash from the grate; the overlooked and the undervalued making sure those above stairs find their happy ending. Of course, they’ve always been running the show - after all ‘You can’t have a whirlwind romance without clean bedding’ – but tonight, the servants are also playing every part.

Men, money and microphones will be fought over in this loving and irreverent all-female adaptation of Jane Austen’s unrivalled literary classic. Let the ruthless match-making begin.

The Lyceum’s Artistic Director, David Greig, said: “Blood of the Young are a brilliant young voice of Scottish Theatre, and their below-stairs take on Pride and Prejudice is a pitch-perfect blend of reverent homage and mischievous send up. I could not be more delighted to be working with them to bring this show to The Lyceum stage, and out to our partners across the UK.”

Tickets:
The show comes to Northern Stage from 2-12 October. Tickets from £10 are available from the box office on 0191 230 5151 or book online at www.northernstage.co.uk 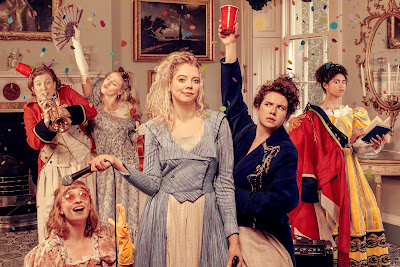