From making the perfect sherry trifle, waging war over cakes through to the playground politics of sweets and the rigid rules of restaurant dining, this is a moving and evocative tale of love, loss and... toast. 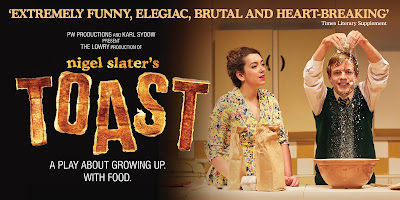 Following its world premiere at The Lowry, Salford in May, a sold-out run at as part of Traverse Festival 2018 at the Edinburgh Festival Fringe, and a London transfer to Andrew Lloyd Webber’s The Other Palace, Nigel Slater’s Toast announces further dates for its UK tour and it will arrive in Newcastle in September.

Fresh from the West End run, Giles Cooper will continue to star as Nigel Slater, with further casting to be announced. Giles’s theatre credits include This House, People and After The Dance at the National Theatre, and Henry V and The Duchess of Malfi at Shakespeare’s Globe. Roles in hit British films include Pride and The Lady in The Van.

Nigel Slater said: “With the London run approaching its conclusion, it’s an extremely exciting time as the words on the page will soon come to life once again for audiences around the country. I’m thrilled that the play will continue its journey after The Other Palace.”

Originally produced by The Lowry for Week 53 festival, Toast is written by Henry Filloux-Bennett and directed by Jonnie Riordan. Henry Filloux-Bennett explains: “Having written ‘Toast’ whilst working at The Lowry, that the production is coming back to the North of England after its run at The Other Palace is exciting enough. Now that I have moved to the Lawrence Batley Theatre in Huddersfield, I’m completely delighted that we get to open the tour of ‘Toast’ here in Yorkshire, starting as it will our 25th Anniversary season.”

Based on the British Book Awards Biography of the Year, Toast is a new play based on Nigel Slater’s award-winning autobiography. Vividly recreating suburban England in the 1960s, Nigel’s childhood is told through the tastes and smells he grew up with and the audience with be enveloped by the evocative sights and sounds of cookery that defined the definitive moments of his youth.

The author of a collection of bestselling books and presenter of nine BBC television series, Nigel Slater has been the food columnist for The Observer for 25 years. His memoir ‘Toast - the Story of a Boy’s Hunger’ won six major awards, has been translated into five languages and became a BBC film starring Helena Bonham Carter and Freddie Highmore. Nigel’s latest book Greenfeast has recently been published by HarperCollins.

The food writer and journalist Nigel Slater tells Matthew Amer about seeing his memoirs brought vividly to life on stage in Toast, bringing food into the theatre and the surprising impact his story has had on audiences.

What’s Toast about?
Toast is the story of a little boy who feels abandoned because his mother dies when he’s very young and his father falls in love with another woman. The boy’s life suddenly changes with the arrival of a woman who’s completely different from his mother. It’s about learning to make your own way and gaining the strength to do something surprising at that young age, make big decisions about your life.

It’s your story, but it sounds like you’ve managed to separate yourself from the character of Nigel.
I have, a little bit. There’s 50 years between us! He will always be another person until I sit in the theatre and watch either very tender scenes or very upsetting scenes. Then suddenly all those emotions come flooding back and it isn’t that little boy any more, it’s me. The words I spoke stayed with me. I put them in the book and now they’re on stage as well.

What moved you to write your memoirs?
I wasn’t the driving force, actually. I was asked to write an article about the food of my childhood. When I started writing, I realised that everything I was tasting brought back a lot of memories. Every food item was associated very clearly with a particular part of my life or vignette from my childhood. The day after it was published, my editor said “I think it should be a book.”

How did you feel when playwright Henry Filloux-Bennett asked about adapting it for the theatre?

I said “No.” I just didn’t see how it would work on stage. But when he sent part of the script I was completely blown away. I could feel the emotions; I could almost reach out and touch the people. I thought “This is going to work, let’s have a go.”

Jonnie Riordon, the director, has done this thing that directors do of making the show not a slightly sad story of a little boy losing his mum and being forced to live with a stepmum he didn’t like, but a really joyous performance. Right from the start, he decided that the heart and soul of this show is food. When I walked in on the very first night at the Lowry in Salford, I thought “Where’s the smell of toast coming from.” It was Jonnie walking round waving bits of toast before the audience sat down.

There’s magic to it when the food appears. For instance, my stepmother will open a cupboard and there will be a wonderful cake or some pastries waiting. It’s like little doors keep opening and food keeps appearing. The food is almost a cast member in its own right. The cast, as well as having to remember their lines, positions and all the usual things actors do, also have to run into the audience and hand out sweeties and treats. It really makes quite an impact.

How involved with the production have you been?
It is my story, so I do feel protective of it. But Henry got the spirit of the book straight away and Jonnie picked up the sense of fun, so I felt it was all in extremely good hands. I’ve kept a close watch on it, but everyone understood it is more than just a story of a little boy and his mum. It’s a bigger than that. It’s affected many people.

There are so many children that have felt abandoned after a bereavement. There are so many children that don’t understand why this new person’s come into Dad’s life or Mum’s life that they have to accept. It isn’t just my story. Lots of kids have that emotionally tough time. I hadn’t realised so many people would come up to me, send me letters or write emails saying “That is my story. That happened to me.”

How important is it then that a story that so many people can relate to is touring the UK after its London run?
I’m thrilled that it’s in London. I’m overjoyed. But the fact that it’s going to all those cities around Britain is such a buzz. It is a countrywide, universal story; children having a tough time but not being able to talk about it. I couldn’t be happier that it’s going round the country.

How closely have you worked with Giles Cooper, who plays the younger Nigel?
We have become very good friends. We talk a lot and he asks a lot of questions, which is great, but I’ve never, at any time, said “Nigel wouldn’t do that” or “Nigel didn’t say that.” I don’t want a carbon copy of little Nigel. And Giles is just wonderful. He plays Nigel with aplomb.

Finally, what can audiences expect from a trip to see Toast?
They can expect a magic, the luxury of nostalgia and some fantastic surprises and treats that you don’t usually get at the theatre. It might be worth popping in a Kleenex as well, because there have been quite a few tears.