JOHNNY CASH ROADSHOW STOPS OFF AT THE HIPPODROME

The Johnny Cash Roadshow is on the road again with a very special show celebrating 50 years of one of Cash’s most beloved albums and is stopping off at Darlington Hippodrome on Friday 10 May. 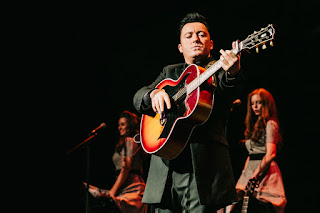 To mark the 50th anniversary of Cash’s At San Quentin album, The Johnny Cash Roadshow will perform hits from the album which was released in 1969. At San Quentin was the second in a series of albums The Man In Black recorded live at US prisons and contains hits such as A Boy Named Sue, Wanted Man and Jackson.

The Johnny Cash Roadshow will pay homage to At San Quentin performing a set list featuring its top hits.

Fronted by talented singer/songwriter Clive John, the show is all-singing and all-dancing featuring costume as Cash wore for the San Quentin performance and even two original Johnny Cash harmonicas.

Clive John said: “We wanted to do something a bit different for 2019 and pay tribute to a fantastic album and ground breaking performance which is a firm favourite among fans. Fifty years after its release, At San Quentin is still considered some of Johnny’s best work and we can’t wait to head out and perform it.  It’s exciting to do something new for 2019 and we are confident Johnny Cash fans are going to love it.”

Tickets:
The Johnny Cash Roadshow is at Darlington Hippodrome on Friday 10 May. To book call the Box Office on 01325 405405 or visit www.darlingtonhippodrome.co.uk.
Posted by North East Theatre Guide at 11:39