“A sophisticated, moving and often very funny piece of writing” «««« The Stage (on Diary of a Hounslow Girl)

In the year that has seen knife crime in the UK soar to an unprecedented level, writer and actress Ambreen Razia, whose hugely successful Diary of a Hounslow Girl has been commissioned by BBC Three for a pilot, presents the corrupt and violent world of inner city gang culture. Ambreen will once again be collaborating with director Sophie Moniram, one of The Old Vic 12 class of 2018. 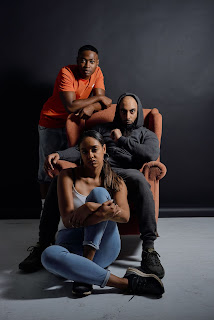 POT delves into the lives of Britain’s invisible children, adrift in the care system and inadvertently impacted by gang culture.16-year-old Louisa wakes up in a flat on her estate with her erratic and unstable boyfriend Josh missing and a notorious drug dealer on her back. A young man, Miles, who is clearly concealing his own troubled past has been appointed her protector. Time is running out as Louisa must decide whether to do the right thing whilst a series of revelations suggest everything is not as it seems.

Ambreen Razia said, “POT is a raw tale set in inner-city London and it pulls no punches. It raises questions about why young people who leave care, form families on the streets. I want to capture these stories which go untold, the voices which echo from the underbelly of our cities; nobody should be exempt from seeing themselves reflected back at them. I believe that through theatre we can help tell stories which centre around young people who are unheard, mis-represented or exploited, enabling us to break down misconceptions and dismantle damaging stereotypes.”

Director Sophie Moniram was an Assistant Director on the critically acclaimed production of Yerma at the Young Vic and is a Creative Associate at the Gate Theatre. Directing credits include Diary of a Hounslow Girl by Ambreen Razia (national tour), The Five Stages of Waiting by Caro Dixey (Tristan Bates Theatre), Creditors by August Strindberg (in a version by David Greig) (Cockpit Theatre), Fucking Outside the Box by Jessica Burgess (VAULT Festival: The Vaults).

POT has been commissioned by Ovalhouse and supported by Stratford Circus Arts Centre.

Ovalhouse is a lively theatre on the Kennington Oval, opposite the famous cricket ground. For the past 50 years, Ovalhouse has been part of the London fringe, providing development and performance space to experimental, radical and overlooked artists. Whether you love a show or not there is always so much talk about after a performance here! Today Ovalhouse is known for theatre and performance that speaks to a world beyond the mainstream, and continues to be a vital home for boundary-pushing art and artists with an eye on the future.

Stratford Circus Arts Centre is a vibrant place to create and experience art through world-class theatre, dance, music and circus and visual exhibitions and we present work for families, young people and adults. We support national, international and East London artists to create new work that is relevant to local people, connecting artists and audiences to help them find authentic voices.

On The Web:
#POTthePlay
@AmbreenRazia
@RuaArts
www.ambreenrazia.com
Running Time: 90 minutes, no interval
Suitable for ages 14+ (references to drugs and alcohol)

Tickets:
Tickets are available online from www.queenshall.co.uk and from the box office: 01434 652477