Follow North East Theatre Guide on Twitter at https://twitter.com/NETheatreGuide and on Facebook at www.facebook.com/NETheatreGuide.
Wytch
Newcastle Castle Keep
Friday 14th October to Monday  31st October 2016
This October, one of the most mysterious and sinister parts of Newcastle’s history will be exposed inside the fortress that gives the city its name. The makers of ‘Hitler’s Headquarters’, Twenty Seven Live, have teamed up with critically acclaimed writer Lee Mattinson (Crocodiles, The Royal Exchange, Season Ticket, Northern Stage) to present ‘Wytch’: a theatrical event taking place at Newcastle Castle Keep. 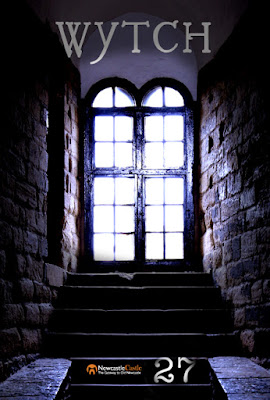 By the 17th century, the Castle had outgrown its defensive purpose and was being used as a gaol for the county of Northumberland. Twenty Seven Live will present their performances in the Great Hall of the historic building. Beneath the audience’s feet lies the Castle’s basement where some of the accused ‘witches’ were imprisoned in the 17th century before their trials.
On 21st August, 1650, fourteen women and one man – condemned as “the children of Satan” – were hanged on the Town Moor: the largest mass execution for witchcraft in English history. This came towards the end of an era of paranoia, hysteria and fraud, triggered by the English Civil War.
The witch trials of Newcastle were some of the most notable in the country, and parallels can easily be drawn with the later Salem Witch Trials in the U.S. State of Massachusetts.
Learning Officer at Newcastle Castle, David Silk, explains: “Newcastle had suffered a turbulent decade with plague, and being besieged by the Scots in 1644. This all culminated in a craze for witch-finding in 1649 and 1650. We are very excited to have Twenty Seven Live bring to life the grisly past of our town, and that of one of the darkest chapters in the Castle’s history.”
The witches have more recently been in the local News, when their remains were dug up in the graveyard of St Andrews Church on Newgate Street in 2008, reminding the people of Newcastle of these women and their unnerving deaths almost four hundred years ago.
‘WYTCH’ by Mattinson takes place outside the usual operating hours of the Keep, which is the oldest surviving landmark in the city, and this production will shine a light on some of the unfortunate characters that were imprisoned within its walls.
“Wytch has been unlike any other project I've worked on. I'm usually faced with a blank page on which I can write whatever my heart desires. But with Wytch, came the responsibility to dramatise the very real executions of very real people with little more than a list of names to hand. It explores a climate of paralysing paranoia that lay hidden in the city's history all along and the baffling reality that the world not once hung witches but also wizards.”
Tickets:
Wytch runs from Friday 14th October until Monday  31st October 2016 at 7:30pm (with no shows on the 16th, 20th, 22nd, 29th and 30th)
Tickets are £15, with £12.50 concessions and go on sale on the 5th September at 7pm.
See https://www.ticketsource.co.uk/event/140797 to purchase, or www.twentysevenprodutionsuk.comfor videos, links and more information.
Posted by North East Theatre Guide at 23:04