Preview: Be My Baby at Newcastle Peoples Theatre


Follow North East Theatre Guide on Twitter at https://twitter.com/NETheatreGuide and on Facebook at www.facebook.com/NETheatreGuide. Read about JoWhereToGo and its PR and photography services here.
A bundle of joy or a shameful secret?
The sixties weren’t so swinging for single mums…
Be My Baby
by Amanda Whittington
Newcastle Peoples Theatre
Tuesday 19th to Saturday 23rd April 2016
The swinging sixties are so firmly associated with sexual liberation that it’s easy to forget the generation of young, single mothers who never had it so bad. 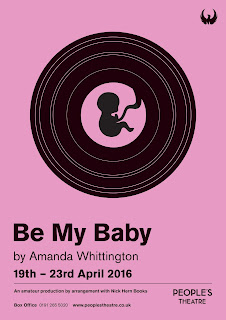 Set in a dour northern maternity home in 1964, we follow the fortunes of 19 year-old Mary Adams, unmarried and seven months pregnant. Forcibly sent to the home by a mother intent on keeping up appearances, Mary has to cope with the dawning realisation that she will have to give the baby up for adoption whether she likes it or not.
Only her record player and the upbeat songs of the era keep her sane.
“The longer you hold her, the harder it’ll be to let go…”
Amanda Whittington’s bittersweet drama focuses on the pain and the laughter of four young women stigmatised and drawn together by a judgemental society.
Barely out of their own childhood, Mary, Queenie, Norma, and Dolores find an all too brief escape from their heartbreak by listening, dancing, miming, and singing to Mary’s collection of hit singles by sixties girl bands such as The Ronettes and their eponymous hit that gives the play its title.
Director Pat Dunn (Grandma from the BBC TV sitcom Hebburn) says “The music’s fantastic and it’s been great fun in rehearsals, but of course it assumes a very poignant, ironic, and tragic character in the context of this play.”
We are proud to give this play its amateur premiere on Tyneside, once again bringing our audience contemporary drama they would otherwise rarely see in Newcastle.
Tickets:
Be My Baby comes to The People’s Theatre on Tuesday 19 to Saturday 23 April 2016  at 7.30pm
Tickets: £13.50 (Concessions £11)
Box Office: 0191 265 5020 or online at www.peoplestheatre.co.uk
Posted by North East Theatre Guide at 20:16