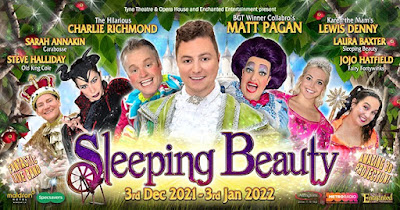 Local Tyne Panto regulars Charlie Richmond and Lewis Denny return to the Tyne Theatre for the first non-socially distanced pantomime for a couple of years. The result is a very good traditional pantomime that had the kids screaming, booing and cheering throughout.

The live band fired up as the lights went down and with a bang, Fairy Fortywinks appears. Jojo Hatfield immediately gets the audience to cheer her entrance Here’s the thing with this show, the audience were only asked to give a simple acknowledgement for the entrance of just two of the characters and that works really well. Too many pantos drown as each actor wants their own moment with the audience. Keeping it simple is best for a great family panto.

Then we are introduced to the classic panto love triangle between the Princess Tamara (Laura Baxter), the Prince Kristoff (Collabro’s Matt Pagan) and the comic Chester (Charlie Richmond). The royal couple are given opportunity to show off their singing skills, Charlie gets to deliver the jokes. Music wise, this show has got the mix about right - not too many songs and with the right people singing. Joke wise: Charlie Richmond, along with Lewis Denny is making his debut as the Dame, takes the audience on panto’s Greatest Hits. Each joke is a well crafted, time served quip (four hates makes 32 did you know?)

But the show has a hi tech moment. Now I’m no fan of 3D in a theatre, however, the use of it for the take off scene was inspired. No spoilers here, but having more than just a member of crew wrapped up as a mummy had the youngsters screaming!

This is also a traditional panto in that it tended to stick to the story - making it suitable for the younger members of the family. The only brief diversion was for the 12 days of Christmas, which is a long tradition at this theatre.

Which brings us to the north east stars that have deserved much more credit in the region. Charlie and Lewis have both managed to develop the craft of delivering both comedy and blasts of exposition. Both deserve much recognition in turning around a panto that was, a few years ago, becoming stale. I know it may seem a contradiction but it is possible to keep a show traditional but also to keep it fresh and fun. It was also good to see that the humour was safe for the whole family - unlike some shows which push the limits of what is quite rude.

So this panto delivered a nice story, had a charming cast in pretty costumes and some great singing voices delivering some challenging songs. It had some new tech that was used judiciously.   All in all, a decent panto for the family to enjoy.

#ad Tickets are on sale now and are available from the theatre and Eventim UK: https://tinyurl.com/TynePanto2021