Innovative Sunderland based immersive theatre company Theatre Space North East are returning with their hugely popular annual festive family tour, a year after their tour of Hansel & Gretel braved the elements and COVID restrictions to bring a slice of Christmas magic to audiences across the region.

Renowned for the Plays in the Parks season of free outdoor Shakespeare performances, which have taken over green spaces in Sunderland every summer for over a decade, Theatre Space’s Christmas shows are a relatively new addition to the company’s line up, which kicked off with an

immersive retelling of A Christmas Carol in Newcastle Castle in 2018. This year, the company tackles another timeless classic, with a specially adapted version of Treasure Island set to whisk would-be adventurers off on a daring high-seas expedition, filled with dastardly pirates and treasures galore. 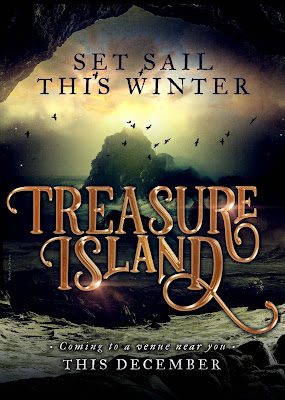 The production will be touring small community venues throughout the North East, ensuring communities across the area can access affordable festive entertainment, with a mix of indoor and outdoor stops on the tour.

The show, which is performed twice nightly at 6pm and 8pm, will play Newcastle’s The Bike Garden on 9 th December, followed by Jarrow Hall at the former Bede’s World on the 10 th . The tour then moves to St Paul’s Church in Murton on 11th and then St Andrews Church in Roker, Sunderland on 14th . Dates at Hexham Abbey, Locomotion in Shildon, Trimdon Village Hall, and Sedghill Community Centre in Cramlington follow from 15 th -18 th . In the week before Christmas, the tour then visits Hebburn’s Hedley Hall on 20 th December, followed by Emma Hall in Crawcrook on the 21st a further date at St Andrews in Roker on the 22nd ,

finishing in Durham at the Greenhills Centre on the 23rd .

Dates at Hexham Abbey and The Bike Garden are outdoors. Audiences are advised to wrap up warm and dress for the winter weather.

Robert Louis Stevenson ‘s classic tale has been specially adapted by local writers for this tour, featuring all of the memorable parts with Theatre Space’s own unique twists. Brave Jane Hawkins is in search of the dastardly pirate Captain Flint’s treasure, said to be buried somewhere on the fabled Treasure Island. Along the way, she encounters a menagerie of colourful characters and seafaring scallywags, all of whom wouldn’t mind a slice of the pirate’s bounty.

The show comes after one of the most tumultuous and turbulent periods arts organisations and theatres have faced in a generation and its down to the dedicated and loyal audiences Theatre Space has been lucky to retain that the company have been able to weather the storm. The company’s summer season once again saw record numbers attend in July & August, as lockdown weary Shakespeare fans clamored to get their theatre fix. The company was also boosted by the UK government’s Cultural Recovery Fund which saw a vital cash injection fund new jobs at the company’s Nile Street HQ as well as allowing the company to stage their productions safely amid crippling COVID restrictions.

Since the start of the pandemic, the company has been able to support over 40 creatives, freelancers, actors and practitioners and provide performing opportunities to many performers who were facing up to having to leave the industry due to the nationwide shutdown of UK theatre. Theatre Space’s unique brand of site specific, immersive theatre meant they could be the first theatre organisation in the North East to return to live performances and welcome audiences back after lockdowns were eased with last year’s Hansel & Gretel being one of the sole festive productions able to go ahead.

Audience feedback from last year’s production was overwhelmingly positive, with attendees praising the writing, creative staging, energetic performances from the cast and crew of 4 as well as recognition of soldiering on through the challenging conditions.

Funding from the Cultural Recovery Fund has also helped to fund this production, allowing the company to keep ticket prices capped at £10 for adults and £8 for concessions and emergency services personnel, ensuring affordable, accessible theatre is available to all. The fund will also go towards staging an innovative dystopian play ‘Girl in the Machine’, touring in early 2022.

Tickets are available at https://www.theatrespace.org.uk/productions/  (booking fees apply) and must be booked in advance. On the door sales are not available. Strict covid safe procedures continue to be in place, including the wearing of face coverings at indoor performances, temperature checks on arrival and extra sanitisation stations throughout the performance area.

Audiences may be required to show proof of a negative lateral flow test or their COVID vaccination status upon entry. Patrons showing signs or symptoms of COVID-19 should not attend.