Preview: Priscilla Queen of the Desert at Darlington Hippodrome

Priscilla Queen of the Desert

Get your glitter on and take the ride of your life with the hilarious and heart-warming Tony Award-winning Broadway musical, Priscilla, Queen of the Desert live on stage at the Darlington Hippodrome in April next year.

Following their most recent production, Strictly Musicals 3, Darlington Operatic Society stages this international smash hit musical complete with a dazzling array of over 300 outrageous costumes and head-pieces created by the team at Carry On Costumes who have produced specialist pantomime costumes for Christopher Biggins and Paul O’Grady as well as costumes for the recent West End hit Elf the Musical. 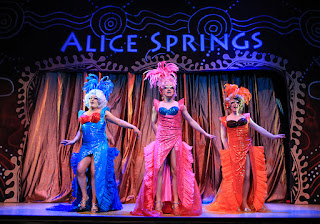 Completing the fun is a hit parade of infectious dance songs from the 70s and 80s by Tina Turner, Cyndi Lauper, Donna Summer, The Village People, Kylie Minogue and many others and include “I Will Survive”, “Don’t Leave Me This Way”, “Hot Stuff”, “Girls Just Wanna Have Fun”, “True Colours” and “I Love The Nightlife.” 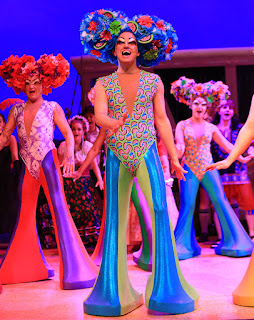 Based on the 1994 smash hit movie, Priscilla Queen of the Desert follows the journey of two drag queens, Tick and Adam, and a transgender woman, Bernadette, as they travel across Australia in their bus, named Priscilla. Tick has been asked to perform at a hotel in Alice Springs by his estranged wife, Marion. Taking Adam and Bernadette along with him, the trio drive from Sydney to the remote resort town in the middle of the desert. Tick tells his companions that the trip is a favour to his ex-wife, but does not reveal that he also has a young son he does not know, but who now wants to meet his father. As they head west, Tick, Adam, and Bernadette learn to accept and support each other, whilst encountering a number of strange and colourful characters along the way. After experiencing violent homophobic threats, Adam is forced to realize that not everyone is accepting of his flamboyant lifestyle, whilst Bernadette opens up to the possibility of love again following the death of her husband. Upon reaching Alice Springs, Tick finally meets his son, Benji, who accepts his father’s drag queen persona. The trio perform at the resort and realize that they have forged a bond that will last forever. 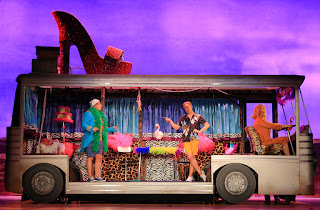 Priscilla Queen of the Desert is a flamboyant, funny, disco-fuelled musical that is guaranteed to get the audience up on their feet. Don’t miss the bus! Hop on for a journey to the heart of fabulous!

Photos: Images from DarlingtonOS production of Priscilla in 2018 by Scott Akoz

Priscilla Queen of the Desert runs at Darlington Hippodrome from Wednesday 27 April to Saturday 7 May, 2022. Tickets are available now from www.darlingtonos.org.uk or by calling the ticket hotline on 01325 244659. Age recommendation 14+