Ad: Tickets are now available from our affiliate Eventim UK Tickets. This means we receive a small share of the sale. Clicking on these links helps us to cover the costs of producing the North East Theatre Guide free of charge to both our readers and theatres.
Beverley Callard Takes
The Thunder Girls On Tour!

Covid-19 Update: ‘In light of new government advice, The Thunder Girls shows due to take place on the 22nd-26th September 2020 will be rescheduled to Autumn 2021. As we work to reschedule the show, we ask all ticket holders to hold on to their tickets which will remain valid for the new date. If you are unable to attend the rescheduled date, refunds will be available from your point of purchase’

After 30 years as the queen of the street, Beverley Callard is leaving corrie to take the smash hit theatre show The Thunder Girls on tour visiting Newcastle! 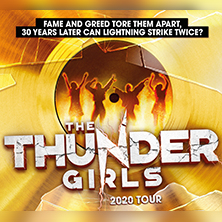 Best known for her role as Coronation Street Landlady, Liz McDonald, Beverley Callard announced today that she has quit the Street to revive her role of Roxanne, in the critically acclaimed The Thunder Girls, when the show tours next year.

Tickets for the national tour of the box office smash production, written by Melanie Blake, adapted from her number 1 best-selling novel of the same name, go on sale today.

The Thunder Girls, follows a fictional ‘80s girl group who haven’t seen or spoken to each other in 30 years after greed, envy and ego tore the band and their friendship apart. The play, which also features original music and songs, focuses on the ‘reunion dinner from hell’.
Former lead singer Chrissie Martin, played by ex-EastEnders’s star Carol Harrison, is desperate to salvage herself from bankruptcy after being conned out of her fortune by her toy boy husband.  Chrissie organises a ‘re-connection’ dinner, but it’s soon clear that the main course on the menu is revenge.  Beverley Callard plays the role of Roxanne, the former band member who holds the balance of power in the reunion summit - but Roxanne’s wounds are the deepest as Chrissie didn’t just steal her career when she broke up the band, she also stole her man, their manager Rick.   Coleen Nolan also reprises her critically acclaimed role as Anita and Gary Webster returns in the role of Rick.

Beverley says: “Leaving Coronation Street is the hardest decision I’ve ever had to make but I just couldn’t miss out on playing Roxanne in The Thunder Girls again.   I knew it was something special when I first read the script, but none of us were prepared for the audiences giving it three standing ovations a night! After that we knew we just had to get this show on the road and let more people have the chance to eavesdrop on what is quite literally the Girls Night In From Hell! I’m so proud to be in such a rare show with a four strong ensemble of real women with real life experience, especially as so many men in power said for years that this show wouldn’t be a hit because ‘no one was interested in women over 50!’ – We certainly showed them! The Thunder Girls is, rich in drama, comedy and tragedy, it’s a bit like the Christmas day episode of your favourite soap that you wait all year for! Most important of all, this play is fiercely entertaining and our audiences love it. And I can’t wait to do it all again”.

Angela Squire, Producer, says: “Following the phenomenal reaction to The Thunder Girls during its record-breaking Preview run in at The Lowry, Salford, we are thrilled to announce that The Thunder Girls will be hitting theatres all over the UK on its 2020 tour.

Beverley Callard gave a powerhouse of a performance in the role of Roxanne and we are honoured and overwhelmed that Beverley is leaving her iconic role as Liz McDonald in Coronation Street to reprise her role on The Thunder Girls 2020 Tour.  There couldn’t be a better endorsement of this new work than Beverley's commitment to the role and the show.  Beverley's tour de force portrayal of Roxanne, combining brilliant comic timing with vulnerability, brings the authentic dialogue to life in the most electric way.

For us as Producers, one of the biggest achievements of The Thunder Girls so far is that almost 80% of our audience were new to the theatre and the art form. We passionately believe that theatre is for everyone and should not be elitist.  When people who love TV, but think the theatre isn’t for them, come and see The Thunder Girls and have a brilliant night - that is the best ever 5-star review.  It is very exciting that The Thunder Girls is opening theatre doors to a new audience.”

Melanie Blake says: “Just as I chose The Lowry, in Salford, for The Thunder Girls world premiere preview because Salford council had housed me when I was once a vulnerable teenager, I have now chosen to commence The Thunder Girls national tour in Stockport, just yards from where I was born, grew up and went to school.   As a proud Stopfordian I couldn’t imagine a better place than the fabulous Stockport Plaza to kick off the next leg of our wonderful journey. I’m overwhelmed by how much the audiences loved the show and our cast and creatives have become a real family. When I saw our incredibly powerful, empowered and talented actresses bring my characters to life, I just knew the preview of The Thunder Girls was only the beginning, I can’t wait for the whole of UK to now get a chance to see our show on tour.”