Follow North East Theatre Guide on Twitter at https://twitter.com/NETheatreGuide and on Facebook at www.facebook.com/NETheatreGuide.
Strength and Unity in Ambundance
Offside
Newcastle Northern Stage
Until Saturday 29th April 2017.
Written by Sabrina Mahfouz and Hollie McNish
Director: Caroline Bryant
Futures Theatre present a show which is about much more than a brief history of women’s football. Nor is the play one about women’s rights. No, it is more than that. It examines Britain’s culture and attitudes to itself, not just women. As long as we objectify our heroes then we dehumanise them. Offside is a morally strong and powerful drama, yet it remains entertaining. 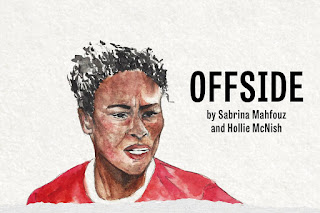 Central to the show are two young footballers. They have dreams that extend beyond winning their next match for their clubs. They want to win for their country too. The issue is that they happen to be female and women’s football has struggled to be properly funded and acknowledged to have an equal footing with the men’s sport. 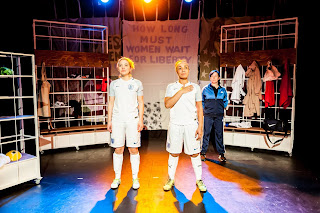 Offside reveals two historic heroes of these players. Tanya-Loretta Dee appears as both Mickey and her hero Carrie Boustead. Carrie was a black footballer from Glasgow that played in the 1880s. She fought against prejudices against how a sportwomen appears on the pitch and the right to vote in elections off it. 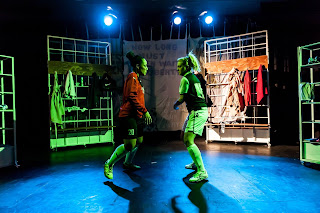 Keeley, and her hero Lily Parr are performed by Jessica Butcher.  As a young footballer she receives much unwanted attention from the press who are as interested in her private life and her appearance as they are in the game and tactics. The intrusion is painful for the members of the audience as it is clearly unnecessary but you have to recognise it happens. 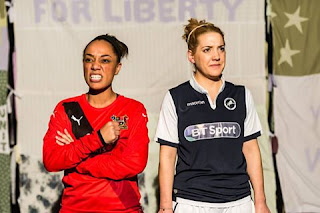 Keeley’s hero Lily played football during the First World War to large crowds. In 1921 the FA issues a ban in 1921 which forbade women playing football at any FA affiliated grounds on the count that it was not suitable for the female body. Lily fought against this directive. The idea that women were more than capable to carry out heavy house work and yet they could not kick a ball is emphasised through verse. The poetic elements of the script can be, we assume be down to co-playwright poet Hollie McNish.

Additional parts of trainers, referees and reporters are all executed by Daphne Kouma. A variety of voices enable rapid change of characters including numerous reporters. 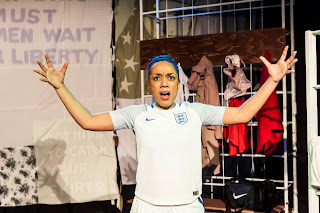 A fabulous cast delivers the outstanding play. The show is as much about the fight for equality as it is about football. It highlights the lack of a level playing field. Whilst the men get massive wages, the equivalent female game struggles to find the funding to pay for transport to the games. There is also the internal dialogue that can be a barrier too - it is acceptable for women to get sweaty and dirty playing sport. In fact it is positively advisable. We still have a long way to go but brilliant theatre like this will help raise awareness.
Well worth seeking out.
Review by Stephen Oliver