“I even thought of killing her,
and that seemed a far more sensible idea.” 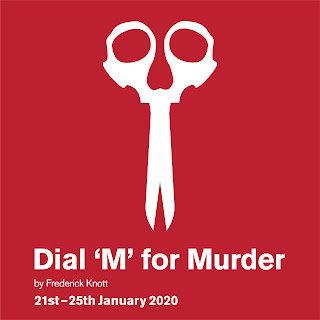 Fading tennis star Tony Wendice married his wife Margot for her money and now intends to murder her for the same reason. But can he get away with it?

He thinks he’s planned the perfect crime, but things soon go horribly wrong in this gripping tale of greed, blackmail and deceit.

Considered a classic example of a stage thriller it has been revived on stage a number of times, and while the stage version and film adaptation are very similar, our directors Matt Hope and Jack Thompson are keen to make this classic story from the 1950s relevant to a modern audience.

Matt comments “revenge, ambition and jealousy are, of course, timeless but we’re also really enjoying exploring the elements of coercive control and power dynamics between the sexes that are present in the script.”

Our January thrillers are always popular with audiences, not least last year’s hugely successful Poirot whodunit Black Coffee by Agatha Christie. Dial ‘M’ For Murder promises to be another winter warmer for fans of suspense and intrigue.
Tickets:     £14 (Concessions £11.50)
Box Office: 0191 265 5020 and www.peoplestheatre.co.uk