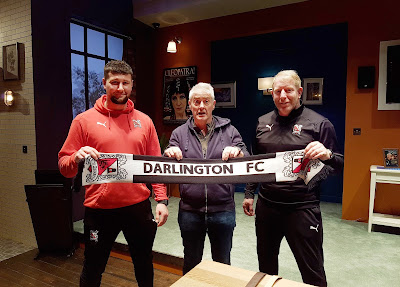 Tommy took time out from his hectic schedule to give Nick advice on how to pace himself through each performance to ensure he can give the best performance each and every night.

Nick is starring in a brand new British comedy Octopus Soup which has just started a UK tour which will see Nick travelling to Portsmouth, Eastbourne, Windsor, Cardiff, Swansea and Guildford before the end of May. 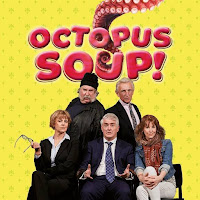 Nick said “Performing on stage for two hours every night really does take it out of you, mentally and physically. The rush of adrenaline you get just before stepping on to the stage in front of an audience is amazing but it can also be very draining.  Tommy has given me plenty of ideas to help me keep fit and healthy during the tour and it was great to catch up on how DarlingtonFC are doing this season.”

Octopus Soup runs at Darlington Hippodrome from Tuesday 26 February to Saturday 2 March. For more information or to book call 01325 405405 or visit www.darlingtonhippodrome.co.uk.
Posted by North East Theatre Guide at 18:19