Preview: My Mental Breakdown: A Musical at North Shields Exchange

My Mental Breakdown: A Musical
North Shields – The Exchange
Friday 8th - Saturday 9th March 2019
In a society that has, at long last, got mental health within the group consciousness, it is still often misrepresented. My Mental Breakdown has been created by a small group based in Newcastle upon Tyne.  They have used their talents and personal experiences to bring together the most underrepresented parts and the cold reality of living with mental illness. 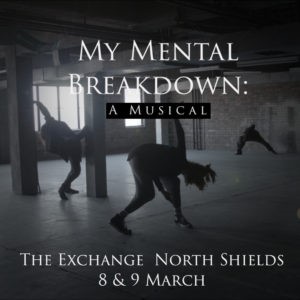 The show aims to help express the inner most and darkest thoughts that many people struggle to put into words.  It hopes it can reach those who have loved ones struggling and try as they might, can’t understand what it’s like.   It is also for sufferers themselves who could benefit from seeing other perspectives and to validate their experiences.

The narrative follows a young man, struggling with the various thoughts and feelings that leave him isolated, and alone. It is written semi-autobiographically by Max Kingdom: the founder of the now annual Canny Fringe Festival. Many men feel that can’t talk about the struggles they go through; many feel that needing help is a form of weakness.

This production shows that it takes real strength to tell people you are not coping. Much of media, such as the popular 13 reasons why, run a narrative where suicide is presented as an understandable conclusion to being sexually assaulted and bullied at school. It glamorises the pain that leads people to take their own lives in a romantically tragic way. My Mental Breakdown does not do this. Suicide is ugly. Awful. It leaves loves ones left behind, broken, full of thousands of questions which will never been answered.

In Kingdom’s real life he lost a friend to suicide: a flatmate that he lives with but never even knew that they were struggling. One day you wake up and realise that person isn’t there anymore and all that potential has suddenly been wiped out. It was this that catalysed the passion that has lead to the creation of this musical. Kingdom has been able to channel his own struggles with poor mental health into a heartbreakingly honest and real production with beautifully bittersweet songs.

Sadly, through lack of resources and lack of understanding, many ‘professionals’ are not actually equipped to help those in need. This is why we need to build a sense of community.  Sometimes doctors can help, sometimes they can’t. Telling people that doctors are the only people who can help only serves to make people feel alone and hopeless. We can help. We need to be there for friends, family and neighbours. Maybe we can’t fix the problem, but a lot of the time just being around is enough; it helps more than you can imagine.

CONTENT WARNING: Themes of mental illness, suicide and self harm.

My Mental Breakdown: A Musical has been fully sponsored by London North Eastern Railway.

All Proceeds are going to Campaign against Living Miserably (CALM) who work tirelessly to help men who are feeling suicidal.  More information on this amazing charity can be found here: https://www.thecalmzone.net