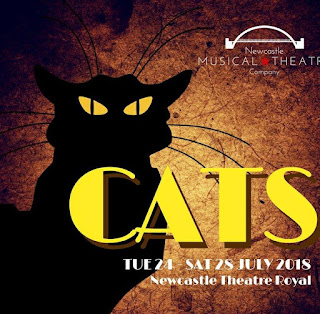 Newcastle Musical Theatre Company are hosting open auditions this November for a chance to star in their 2018 summer production of Andrew Lloyd Webber’s famous musical, , at Newcastle’s Theatre Royal.

Based on poet T.S Eliot’s Old Possum’s Book of Practical Cats, the thirty-six-year long running musical tells the story of a tribe of cats called the Jellicles in a magical, moving and often hilarious glimpse into the lives of others.

This is the first time this beloved show has been open to amateur performing art companies in the , and the forty-five-strong cast will be lead by director and choreographer Sandra Laidler and musical director Liam Gilbert in what is likely to be Newcastle Musical Theatre Company’s most challenging performance to date.

Combining spectacular choreography amongst an oversized set, in a feline frenzy of song and dance, the roles will require strong singers, dancers and actors to portray the unique personalities of these Jellicle cats, as they compete for a chance to ascend to the Heaviside layer to be reborn.

Old Deuteronomy is the leader of the cat tribe, loved and respected by all the cats and kittens, and requires excellent acting and singing skills.

Grizabella, 'the glamour puss', is now old and worn. She has been cast out of the tribe and is shunned, feared and rejected by all of the younger cats. Her character performs the famous show stopper Memory, so performers will need a strong voice and superb acting skills.

Those auditioning for the role of narrator and second in command of the tribe, Munkustrap, must sing, dance and act in equal measure in order to steer the shows numbers and fight the wild cat, Macavity.

Whilst those looking to play Munkustrap’s young brother, Rum Tug Tugger, should be brimming with charisma and Elvis-hipped to pull off the sexy, fun loving and comedic kitten in song and dance.

Open auditions will take place Sunday 26 November from at the , .

Anyone wishing to audition should email nmtc@live.co.uk for further details of the day and what they are required to prepare for the audition.

Newcastle Musical Theatre Company
Established in 1948, have performed a major production at Newcastle Theatre Royal, every year for the last 60 years (excepting 1986, due to the theatre’s refurbishment).

Although an amateur dramatics company, each show is directed, choreographed, set and staged to a professional standard and a major under-taking with production costs exceeding £100,000 per show.

Tickets:
Tickets for the , which will run at ’s Theatre Royal from July 24 – 28, are priced from £12 and available at www.theatreroyal.co.uk.
Posted by North East Theatre Guide at 20:15