Preview: Rhod Gilbert – The Book of John at Stockton Globe 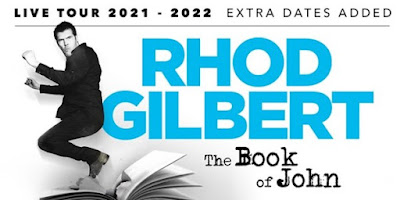 Rhod Gilbert – The Book of John

Online tickets are available from our affiliate ATG Tickets: https://tinyurl.com/RhosGILBERTstockton

As one of the UK's leading stand-up comedy talents, the multi award-winning comedian, Rhod Gilbert is back on the road with his latest new live show, Rhod Gilbert - The Book of John. Rhod’s first live tour since 2012 is set to arrive at the historic North East art deco venue, Stockton Globe on Thursday 10th February.

Following a seven-year break from stand-up (and a further enforced hiatus for obvious reasons), this show sees Gilbert as funny as ever, but like never before. It's a little bit raw, very personal, and brutally honest; no more lies, no more nonsense. This is Rhod, but different, the same, but not. It's a show about hitting rock bottom, and just when you think things can't get any worse, you meet a bloke... a bloke called John.


As one of the UK's leading stand-up comedy talents, Rhod has enjoyed many successful years as a star of television and radio. He has amassed nine series of his hugely popular 'Rhod Gilbert's Work Experience' and has hosted two series of 'Rhod Gilbert's Growing Pains' for Comedy Central. He's regularly hosted 'Have I Got News for You?' and has appeared countless times on 'Qi', 'Would I Lie to YOU?' and '8 Out of 10 Cats Does Countdown'. He has hosted 'Live at The Apollo' on multiple occasions and has performed on 'The Royal Variety Performance'. He has also appeared in a series of the Bafta award-winning 'Taskmaster'.

The comeback tour, Rhod Gilbert - The Book of John originally kicked off in 2019 and the Welsh wonder has already played to over 100 venues across the UK. The show has been met with widespread critical acclaim and every performance to date has sold out. Rhod will continue to donate some of the proceeds from the tour to his chosen charities: The Stroke Association and Alzheimer’s Society.

Rhod Gilbert – The Book of John at Stockton Globe

Online tickets are available from our affiliate ATG Tickets: https://tinyurl.com/RhosGILBERTstockton