DVD and (hopefully) in theatre

Everyone at the North East Theatre Guide has missed out pantomimes and so we were really excited to be asked to review the Customs House show. It has been a regular favorite with its unique blend of local comedy and excitable raucous audiences. 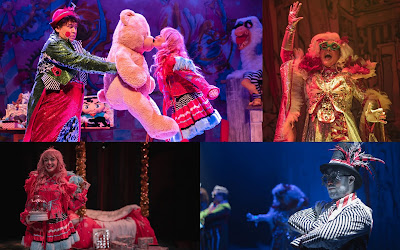 This year we were offered a chance to watch the show at home as it has been recorded and is now available on DVD. This is not the only difference as the directing duties have moved across to David Hopper, who has also written the script with Jen Stevens. Jen has also produced original music for the show rather than using this year’s relevant chart hits. Having said that, the unique designs and costumes of Fox and Shriek give the show visual similarity to the normal Christmas shows at the Customs House.

So what is the tale about? The official blurb says: “Two brothers, Santa Claus, and his brother Jack Frost, have gone their different ways. One is kind and caring, the other filled with jealously.

But on discovering one child, in Cooksonville, no longer believes in Santa, Frost sees his chance to freeze Santa and stop Christmas.

Can Arbuthnot persuade his cousin Dennis to believe? Can Roxy the Reindeer, Jerry the Snowman and Grace the Elf navigate the North Pole, And... Will Dame Bella get her stockings filled this Christmas?”

I suspect the title was chosen long before the show was written as it is much more of an ensemble piece rather than purely a vehicle for Dame Bella and her son. If anything “Dennis rediscovers the magic of Christmas” is closer to the final show as Arbuthnot’s marra pops up regularly.

At the start Santa is frozen by his brother Jack Frost (Steven Lee Hamilton) as a boy in Cooksonville called Dennis (Glen Richard Towsend) doesn’t believe in Santa, so the Christmas Fairy (Eleanor Chaganis) sends Grace the Elf (Bronwen Hanson) so sort it out. Unfortunately she collects cousin Arbuthnot (David Hopper) and her mother Bella (Ray Spencer) instead of Dennis. Our titular couple decide to stay and help sort out presents whilst Roxy the Reindeer (Bethan Amber) and eventually Jerry the Snowman (Dale Jewitt) help Dennis to make it to the North Pole. 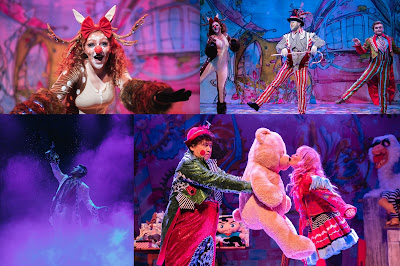 Unlike some pantos, this year’s story is closely followed (rather than complicating things with side stories) which will help keep the interest of the younger viewers. Ray and David are a great double act and there is a conscious decision to break the fourth wall and talk to the camera. This will help with the engagement. Unfortunately the recorded show does lack the audience so to make it work best it would be recommended to watch it with a group. Occasionally the audience participation words appear on the screen which will help the kids not used to the format.

Bethan Amber and Bronwen Hanson’s characters are both charming and add a caring element to the chaos that surrounds the others of stage. In a much shorter show (just under 90 minutes) you might not see as much of some characters like Eleanor Chaganis’s Fairy or Dale Jewitt’s Snowman as you’d like. Indeed Bella and Arbuthnot get a couple of scenes, including a classic messy scene, to go through their usual antics but their screen time is reduced too. The thing is: I’d rather see this shorter show than no show at all. 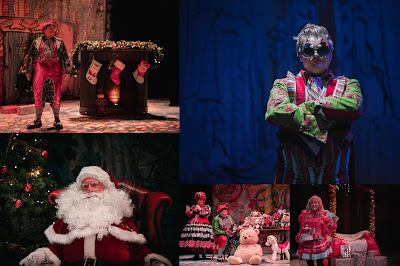 So yes, it does feel strange not seeing this in a theatre full of excited kids full of sugar and noise. 2020 has been full of strange stuff. The DVD will be an ideal thing to stick on when you have a room full of kids to entertain when your bubbles get together over Christmas. The use of original songs that help the plot gives the show more of a musical feel but there are still plenty of panto elements to enjoy. The filming will give your family a great seat in the house and the camera work, from Wycombe 89, is used well to involve the kids in the action from time to time.

Let’s hope panto is back to normal soon as we miss the action!

Capacity in the theatre has reduced to allow social distancing in household or support bubbles of up to six. The venue’s bar and restaurant remains closed, however refreshments can be ordered to be delivered direct to seats.

Tickets from £15 are on general sale from https://www.customshouse.co.uk/theatre/arbuthnot-%26-dame-bella%27s-christmas-adven/

DVDs are available by visiting: https://www.customshouse.co.uk/shop/ 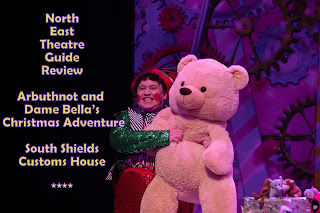