Following the government’s announcement last week that Newcastle was entering Tier 3 restrictions, Newcastle Theatre Royal and producer Qdos Entertainment have been considering all options for their Socially Distanced pantomime, Robin Hood, which was due to open on Saturday 19 December 2020 and run until Sunday 10 January 2021. 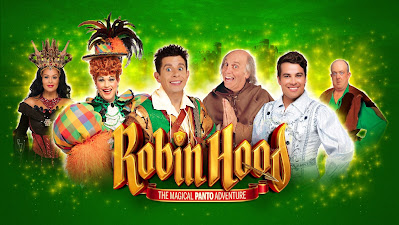 Today the theatre has announced the difficult decision to reschedule Robin Hood to April 2021. Current restrictions mean that theatres are unable to open, and without a clear timeframe for the city moving to Tier 2, progressing with December plans is now not possible.

Philip Bernays said: “This is a huge disappointment – this will be the first year since 1900 that there hasn’t been a Theatre Royal pantomime in Newcastle and Danny, Clive, Chris, Joe and the whole team are devastated. We had really hoped to give some Christmas sparkle but it will now be an Easter treat.”

Director and producer of Robin Hood, Michael Harrison commented: “We know how excited the audience were about this new production of Robin Hood, with queues at the online box office when it went on sale. We’re delighted that the theatre, cast and our friends at The National Lottery are all able to make the show work at Easter, and we’ll be using the extra weeks to make the show even bigger and better!”

This year’s socially distanced production had been created by Michael Harrison especially for the Theatre Royal, to allow audience members to come together safely and enjoy the magic of the much-loved art form this festive season, following the rescheduling of Humpty Dumpty; the pantomime the theatre had originally planned for 2020 which is now on sale for Christmas 2021.

Ticket holders for the show have been contacted and need take no action as all tickets will be automatically refunded over the coming weeks; these customers will also be offered priority booking for the rescheduled dates.

The new April dates and performance schedule for Robin Hood will be announced on Friday 11 December and go on sale the following week: